Each fall, leading up to the first weekend in October, members of University Yacht Club host several events to salute the outgoing commodore and welcome the incoming commodore to the club. The tradition has continued for 72 years since the club’s founding on Lake Lanier in 1951, even before the lake was filled.

“Our club honors many nautical traditions, and the activities surrounding the Change of Watch are among some of the most important and time-honored,” said Mark McQuaid, UYC commodore for the 2022 season. “It’s a time to come together, reflect on the work of the club and its officers for the past year and celebrate our leadership. We also turn over the responsibility for leadership to the next commodore and officers and have a formal passing of the gavel ceremony.”

This year’s Change of Watch took place on October 1, with the membership’s annual meeting and installation of new officers and governors.
“Our Change of Watch formally signals the end of the boating season for the club, although we have numerous social and on-the-water events throughout the year,” Benninghoff said. “From our hosting the lake-wide Lanier Cup sailboat race with representatives from each sailing club on the lake to our holiday celebrations, we are an active club that is like a family to many of us.” 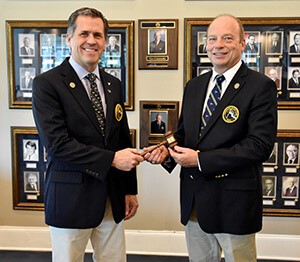 New Commodore Bret “BB” Benninghoff became active in University Yacht Club in 2000 when began coming to the club with his significant other Realtor Gail Raper. He formally joined the club in 2013, becoming captain of the Power-Boat Fleet in 2014 then chairing the facilities committee for two years.
Over the years, even before joining the board, he was called upon to assist with various projects.

“One project I was asked to take part in that is still dear to me was a project to reinvent our Yard Arm area in front of the club house,” Benninghoff said. “I took the project to heart, and we designed a beautiful compass rose that included engraved pavers and memorial benches. We raised funds through selling the pavers and benches and in the end, we had a surplus of money that went to help our Maritime Foundation. I’m very proud of that work, the finished project and how it brought our members together for a great common cause.”

In 2015, he was tapped to serve as a member of the Board of Governors. “I readily accepted,” Benninghoff said. “I had already become part of the fabric of the club and appreciated the people and the traditions.”

Serving as a governor for two years, he was then asked to become a bridge officer in 2019, starting as treasurer, the first step in moving up the club’s leadership bridge to become commodore.

“This club means so much to me and I’m proud to serve our membership,” he said. “In many ways, it hasn’t changed too much. It’s still a place where like-minded people come together to enjoy each other’s company.

“I see that we’re welcoming in new families who are coming into the community and they are contributing in meaningful ways,” he said. “This club has been built on boating traditions and I remember our older members who are no longer with us, their characters and what they thought the club should be. Our social events are very big part of our club, and we also want to stick with our roots of being a meaningful boating club. We’re a big extended family.”

Benninghoff grew up in Bainbridge, Georgia, and attended Florida State University. He’s the owner of Superior Pools and Maintenance in Chamblee.

Outgoing Commodore
Immediate past Commodore Mark McQuaid and Danielle moved to Atlanta in 1994 to be closer to family, joining University Yacht Club in 2009. Both had grown up boating, so it was a natural way to meet new friends.

A graduate of the University of North Carolina at Wilmington with a degree in computer science, he worked in technology before becoming pre-owned sales manager for RBM of Alpharetta Mercedes Benz. Danielle is a graduate of Purdue University with an Information Systems degree. She and Mark met in Washington, D.C., while working for software and consulting firm American Management Systems. AMS gave Mark and Danielle the opportunity to relocate to Colorado, where they eventually were married and enjoyed living for five years.

“I began volunteering at UYC and by 2015, I was asked to become a governor on the board,” he said. “That’s a two-year term, usually followed by a one-year break or more – which I didn’t take – before becoming an officer. So by the time I became commodore, I had formally been serving for six years.”

Once a commodore retires, his service doesn’t end. “We chair various committees and continue for another five years in some type of role,” he said. “It’s an excellent way to preserve our continuity of leadership and maximize everyone’s experience and knowledge.”

For McQuaid 2022 proved to be a transition year. “We had just really come out of the pandemic, so for the most part, we were once again able to pursue more on-the-water and in-person social activities. It has been a good and active year with good participation from our membership.”

When asked about the accomplishments he’s most proud of from his year as commodore, he pauses for a minute.
“Really, there’s not any one thing,” he said. “We’ve been able to preserve the traditions that have been created by those who have gone before us, and to use our existing resources to maintain and improve the club and its facilities.

“Our club is unique in the way we are governed and managed,” he continued. “Our membership has significant input into the way we are run and we have a close sense of community, maintaining our family atmosphere and genuine caring for each other.

“University Yacht Club is a real treasure on the lake,” he said. “The club and the people here make it a truly special place.”

State of LLOP on solid ground even in pandemic