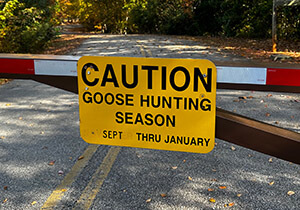 “Goose and waterfowl hunting has always been allowed in certain closed parks in accordance with state hunting regulations and laws,” said Tim Rainey, operations project manager at the Lake Lanier Corps of Engineers Project Management Office. “Our staff and the department of Natural Resources Staff discuss and agree on which closed areas are suitable for hunting each year.”

Dan Barnes, chief of natural resources for the Corps of Engineers at Lake Lanier, explained further.

“Waterfowl hunting is an annual activity on certain public lands,” Barnes said. “We work with the state to help expand hunting opportunities in accordance with state law.”

Here is the list of Corps’ parks that allow waterfowl hunting:

The intent, Barnes clarified, is to allow people to hunt waterfowl as a food source.

“Since additional parks were closed this year, those parks were added to the discussion,” Rainey said. “Some were identified as suitable and some were not.”

Georgia hunting seasons and limits summaries can be found at eregulations.com/georgia/hunting/hunting-seasons-limits-summary.