Wyant speaking to board members.

After 37 years leading the Arts Council, Gladys Wyant is retiring. Through her dedication and vision, she, her boards of directors, and the community have created a far-reaching organization that has championed the arts, not only in Gainesville and Hall County but across North Georgia and the state.

“I remember the days when I first joined the Arts Council part-time, the council had three tiny rooms in the old fire station that’s now the Gainesville Planning and Zoning office building,” she said. “Lessie Smithgall was the first president of the Arts Council, and until 1980, the office was located in her home, then the Elachee Cottage. Lessie has always been a strong supporter of the arts and the community and without her and other philanthropists, we never could have succeeded the way we have.”

Founded in 1970 and incorporated in 1972, the Arts Council was strictly a volunteer organization. Then a part-time director was hired in 1979. for 11 years. Wyant was brought in as executive director by the board in 1983.

“Within six months it was a full-time job,” she said. “And it has just kept growing and growing since then.”

Many in the community give credit to Wyant for bringing the group from a budget deficit in the early days to a regional organization with more than $8 million in assets and a network of performing arts venues and meeting sites. Two of those facilities – the Arts Council Smithgall Arts Center in the city’s former train station, and the Arts Council Performing Arts Center in the former First United Methodist/Westminster Presbyterian church buildings – have been vital to Gainesville’s historic preservation. 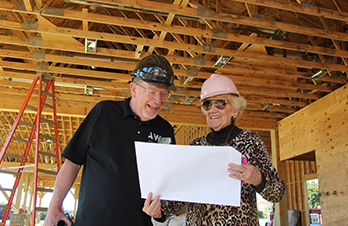 Gladys Wyant reviews plans during construction of the most recent project for The Arts Council, the outdoor stage/pavilion. The facility is now finished.

Wyant’s influence on the arts goes way beyond Gainesville and Hall County. From helping secure funding from statewide, regional, and national arts organizations to serving on numerous statewide arts committees and task forces, she has shared her expertise to assist and/or found organizations in other communities.

A special committee of the Arts Council is conducting a national search for Wyant’s replacement. While she is stepping down this summer, she will be a consultant to the Arts Council until her successor is named and transitions into the position.

Wyant says that she’s looking forward to playing more golf and traveling with her husband Joe and their family.

“I’m eager to experience the arts in other parts of the world,” she said. “And one of the trips I want to take is to Holland. I’ve always wanted to see the tulips there, and of course all the wonderful museums and cultural events.”