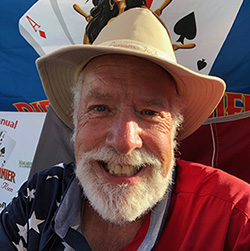 After nearly 30 years of philanthropy and involvement at Lake Lanier, Barkley Geib says he’s retiring from the lake. However, those who know him say they’ll believe it when they see it.

Geib founded the Lanier Harbor Poker Run in 1993, a successful 10-year event that drew boaters from across the US to raise money for children’s charities starting in the mid-1990s. He retired the event in 2003.

Geib has always put others first. That’s why he received the Boys & Girls Clubs’ Helping Hand Award in 2008. He continues to sit on the organization’s advisory board.

When the board of Lanier Partners approached him to consult on its Pirates of Lanier Poker Run in 2012, Geib agreed without hesitation.

“First and foremost, the event supports children’s charities and second, it involves boating,” he said. “Actually, I also got involved because of Rea Williams, one of the founders of Lanier Partners and a driving force behind the successful event until his passing away from cancer in 2016.”

Soon, Geib was asked to expand his advisory role with Lanier Partners. After several years on the organization’s board, he was elected president. He took the reins with every bit of the enthusiasm and dedication he’s known for. Under his leadership, the group took over the organization of the Holiday Parade of Lights each December until two years ago, when current organizer Richard Pickering spearheaded the event.

After he purchased Lanier Harbor Marina on the southwest side of the lake out of bankruptcy in 1993, Geib championed causes for youngsters through the McKinney-Geib Foundation, where he continues to serve as president. Making generous donations to children’s charities, he helped with programs of the Boys & Girls Clubs of Hall County, now Boys & Girls Clubs of Lanier, to introduce kids to boating as far back as the early 1990s.

His contributions to the lake include a stint in the early 2000s as a member of the Lake Lanier Association Board of Directors, heading the committee that initiated the solar lights navigation program. He has also been a long-term member of the board of directors of the Marine Trade Association of Metropolitan Atlanta, the sponsoring organization for the Atlanta Boat Show each January. “I think I’ve served in every position in the Marine Trade Association,” he said with a smile.

In 2020, he received an honorary lifetime membership in the MTA for his service and leadership.

Purchasing Lanier Harbor off Buford Dam Road led to many improvements at the business. For one, it was the only marina on the lake with a 24-hour gas dock. It also became home base for TowBoatUS Lake Lanier.

Robert Estrada, who owns the boating service franchise for Lake Lanier, formerly worked for Geib at Lanier Harbor. “Robert has always been a close friend and I’m proud of the success with TowBoatUS,” Geib said.

In 2007, Geib planned to develop a condominium project at Lanier Harbor when the economy softened and lake levels were at some of their lowest ever. As a result, he abandoned the development and eventually closed the marina.

About that time, Lanier Islands’ Virgil and Mike Williams approached him about bringing the marina’s new gas dock, ships’ store and new covered 19-slip dock to the islands.

“I’m so grateful to the Williams family for allowing me to stay in the business by allowing me to bring my assets to Lanier Islands,” he said. “That move was the pre-cursor to what’s now The Port of Indecision Marina at Margaritaville. When Margaritaville took over the beach area, I was asked to stay and manage the marina through the end of 2019.”

In December 2020, Geib was named Grand Marshal of the Holiday Parade of Lights, another honor that reflects his involvement with Lake Lanier.

Recently, he decided to step down as president of Lanier Partners. He will continue to serve on the board.

Family life has always been first for Geib. His mother died when he was 8, and his father remarried. But within five years, his father also passed away. “I’ve never been without family and grew up with a strong family support system, particularly from my uncle Walker McKinney and my brother Howie Geib.”

A graduate of Jacksonville University in Jacksonville, Fla., he double majored in accounting and management. It would serve him well. After graduation at the advice of his uncle, Geib purchased an office building and also worked in the restaurant and entertainment business.

Because he wanted to be his own boss, the purchase of Lanier Harbor provided several opportunities. It gave him a chance to further support children’s charities through the Lanier Harbor World’s Largest Poker Run with children’s charities as the beneficiaries. It allowed him to travel on the powerboat racing circuit, where he met a dentist/racer who had started Child Smile America. Geib worked with him to introduce youngsters to boating.

And, probably the most lasting benefit: he met his wife Dee, who worked at the marina’s restaurant.

“She was the prettiest waitress on the staff when I met her, but it wasn’t until she took a job as the marina’s bookkeeper that we got to know each other better and we started dating,” he said. The story goes that he surprised her with a proposal, by staging a fake rescue tow from Buford Dam to the marina. When there was no boat to bring back, he proposed. They married in 1999 and have two daughters: Linda Gray Geib, now 19, and Audrey McKinney Geib, now 17.

“Both of my daughters grew up in the marina business doing everything from answering the phones to working in ship’s store and gas dock,” he said proudly. “They know so many people around the lake because of it.”

As for retirement, Geib is somewhat close-mouthed about exactly what he’ll be doing. “You know, it’s a pretty big step to make this change after nearly 30 years on the lake,” he said. “I’m sure I’ll find something to do. I’m always looking for new opportunities. Don’t worry. I won’t sit still too long.”