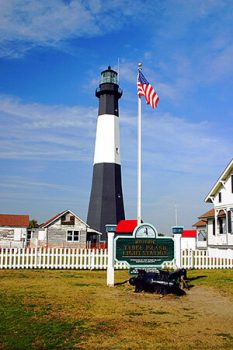 In the vernacular of the famous wordsmith, Jimmy Buffett, “I want to go back to the island, where the shrimp boats tie up to the pilin’. Give me oysters and beer for dinner every day of the year, and I’ll feel fine!” That scenario is rooted deep inside me when summer ends and I want to be alone with my thoughts while visiting an old friend … Tacky Tybee.

My first memories of visiting Savannah Beach more than 60 years ago included a long ride over several bridges and through miles of marshland. Though it couldn’t have been more than 20 miles from Savannah via U.S. Highway 80 to Tybee Island, the trip down the palm-lined, two-lane road in the old ’48 Nash coupe seemed to take forever. Nevertheless, I was less than 10 years old then, and the excitement of seeing a real beach for the first time had my heart pumping wildly!

Tybee Island was a magical fairyland for a youngster, and as I grew older, I often found it to be a very amorous place to enjoy with fascinating ladies that caught my eye. Despite hurricanes, progress and the changing tides, Tybee is still an unforgettable place to enjoy a romantic rendezvous with that special someone. 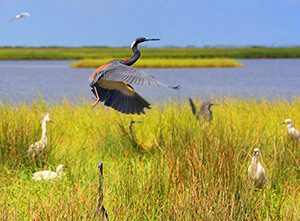 The colorful birds of the wetlands near Tybee Island

Though much smaller, Tybee is almost as unique and diverse as Key West. The six miles of beaches are great for walking and shelling, and the one thing that makes Tybee so different from other islands and beach resorts is that many of the people actually live there throughout the year.

In the language of the early Georgia Indians, Tybee is the word for salt, but we always called the island “Tacky Tybee” … which locals hoped would keep the resort crowd out. Actually, the storefronts, streets and island cottages haven’t changed much from Tybee’s glory years as a popular resort in the 1920s and 30s. It’s that calm feeling of time standing still that is so relaxing.

A Pair of White Ibis at Little Tybee Island

During the summer season, those looking for adventure will find Tybee has deep-sea fishing, dolphin tours, kayaking and cycling. The island is part of the Colonial Coast Birding Trail, and its acres of salt marshes attract a variety of birds … some of which are endangered.

For even more excitement, take a side trip to Little Tybee Island. This small island, just south of Tybee, is only accessible by water. Camping is allowed and the opportunities to view wildlife are endless.

Tybee, however, has one dangerous side known as Pelican Island just off the main beach. This phantom strip of sand appears and then disappears with each tide, and because of swirling waters that pass around it when exposed, this big sandbar has a history of being nasty. The swiftness of the incoming tide forms fast currents that cut in behind those who stay too long shelling or fishing, which has earned it a reputation as a killer. 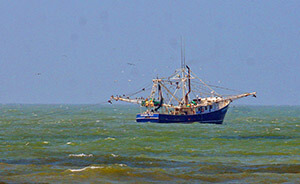 Shrimpers working off the coast of Tybee Island

Tybee is much more than a beach. Its history includes two and a half centuries of settlement, and has been home to pirates, fishermen, beachcombers and soldiers.  It was a battleground of the Revolutionary War and a site of the  War Between the States. It is the home of Tybee Lighthouse, built in 1736 on the South Atlantic shore, and another famous lighthouse that was constructed on tiny Cockspur Island at the mouth of the Savannah River.

Despite being called “tacky” at times, Tybee Island has lots to offer, and some real class in its people, history and interesting opportunities. For me personally, it is a place with a multitude of memories and a haven for intense contemplation of the coming year.

The yearly metamorphosis has begun in North Georgia

‘The Rock’ is the center of a mountain paradise