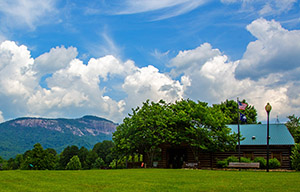 Table Rock Mountain as Seen from the Welcome Center

Long before the first white settlers came to the Cherokee Sah-ka-na-ga (Great Blue Hills of God), the Lower Cherokee Nation had established many hunting camps in the area that now includes Table Rock State Park. According to Indian legend, Table Rock Mountain received its name because the flat-topped mountain served as a table from which the Great Spirit ate his meals.

The signing of the Hopewell Treaty of 1785 quickly brought Europeans into an area in the Oolenoy River Valley known as Pumpkintown because of the huge pumpkins settlers grew. In 1845 a 20-room hotel was built for travelers that lasted until the Civil War. Another Table Rock Hotel was built after the war, but it only survived for about 10 years.

During the Great Depression of the 1930s, the Civilian Conservation Corps (CCC) created Table Rock State Park from mostly donated lands. Today, the park is 3,083-acres at the edge of the Blue Ridge Mountains in northern Pickens County, S.C., which includes Pinnacle Mountain – the tallest mountain totally within the state. Sitting on a cliff that drops down from the mountains in western North Carolina to the upcountry of South Carolina, the vistas throughout the park are spectacular!

The park provides almost 70 camping sites near the park entrance and 25 more sites for camping near White Oaks picnic area. Each site has individual water and electrical hookups and a picnic table. Some sites accommodate RVs up to 40 feet, and both campgrounds are convenient to restrooms with hot showers. In addition, a primitive walk-in camping area with central water is located near Lake Oolenoy.

Fourteen cabins are completely furnished, heated, air-conditioned and supplied with bath and bed linens, basic cooking and eating utensils, automatic coffee maker, refrigerator, stove, microwave and include a screened porch and fireplace. Cabin 16 is user-friendly for the physically impaired, but pets are not permitted in the cabins. 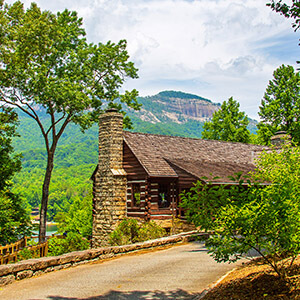 The Gaines Lodge at Table Rock State Park is a carefully restored CCC-era facility that has a spectacular view of Table Rock Mountain. A large, furnished upstairs lodge room includes fireplaces, a 72-seat dining room and catering kitchen on the lower level. The building is named as a tribute to the retired and highly accomplished director of the South Carolina State Park Service, Phil Gaines. The building can be rented for meetings, weddings, reunions and other gatherings.

Table Rock State Park is one of the most popular tourist destinations in the Southeast, and even if you can’t hike the trails, there are things to do for all ages. Fishing at Pinnacle Lake and Lake Oolenoy for bass, bream and catfish is one of the most popular activities, but a South Carolina fishing license is required. Also, a fishing pier accessible to the physically impaired is located on Lake Oolenoy.

The extensive trail system allows hikers to pass streams and waterfalls all the way to the top of Table Rock and Pinnacle Mountains. Table Rock State Park is also an access point for the Foothills Trail and Palmetto Trail. These trail hikers must display a valid parking permit when leaving a vehicle overnight, which may be purchased at the park’s visitors center. Geocaching is permitted and several geocaches are located on the park. Some of the best rock climbing in the Southeastern USA is possible in the park.

A trip to Table Rock State Park takes less than two hours, but any trip to this area would be worth the drive just to experience the magnificent beauty of this hidden treasure. One would surely have to travel to the Rockies or Alaska to find beauty comparable to this Blue Ridge Mountain paradise!

Carters Lake is the deepest lake in the Georgia mountains

‘The Rock’ is the center of a mountain paradise