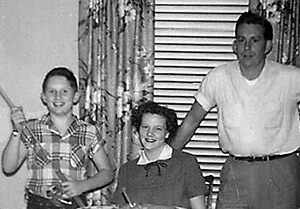 Showing off my rod and reel from Uncle Ben

Until I was about 8-years-old, when visiting my cousin in North Georgia, all I had to use for fishing was a cane pole. I didn’t mind. It had black nylon line, a lead split sinker or two and a small simple straight shank hook. I kept it leaning up against the corner of the back porch next to the well. My cousin, Winifred, and I went fishing every day when we finished his chores; we drew water from the well before and after breakfast so anyone who wanted could wash their hands and face. This was before a bathroom on the mountainside. We raked the hard-packed dirt area around the back steps to give it a fresh look, then fed the chickens and dogs. We “slopped” the three hogs – that is took what was left over from breakfast along, with a few ears of corn. The pigs were kept in a pen out back beyond the outhouse. The pen had a little tin roof shed so that pigs could get out of the sun. We did that twice a day. The outhouse was a two-holer. We probably visited that only once. Being little boys, we could do that anywhere, and probably did.

Anyway, I liked fishing with that cane pole. My cousin had one just like it. We would catch a bream or two, sometimes a little hornyhead, and maybe a catfish from the Tallulah River that ran out of Lake Burton, then through Lake Seed and Lake Rabun and before it formed Tallulah Lake. There was no bridge across the river in getting to the little dirt road to his house, so if the river was low enough and you were driving in the old pickup, you simply “forded” across the rocky bottom. There was a “foot log” with a walled up little platform full of big rocks in the middle of the river, where the two logs joined. My cousin and his dad, Paul, had nailed a 2×6 on top of the log to give it a flat surface to make the walk much easier. There was a water snake that lived in rocks. We looked for him when we walked the log. Sometimes we copped a quick glance before he darted away. We’d walk along the railroad tracks, that crossed in front of his house for about a mile, then over the railroad trestle that still stood above the river and fished in the deep hole under the tracks. Our bait was red wigglers and an occasional night crawler we dug up from the area around the barn. It was easy for a couple of 9-year old boys to dig up a few. It didn’t take long. We’d put them in a Prince Albert tobacco can. I do not recall where the can came from. It might have been his dad’s. Seems to me he rolled his own after supper. I remember he would sit on the steps outside the kitchen door, use his Barlow knife and whittle little sharp pointed sticks then toss them aside. There must have been a purpose, but I do not know what that might have been.

I went there for couple of weeks every summer with my grandparents. They were both from the Clayton, Lakemont and Wiley, Ga. area so the summer visits were a kind of a going home of sorts for them. For my cousin and me, it was playtime every day.

Back to the cane pole. My cousin, Winifred, would keep it handy and did not use it until I returned the next year. It was just like I left it on the porch, in the same spot.

Fast forward to age 10 and with a couple of more summers adding to our adventures. By that time, we’d already graduated to walking the four miles to Lake Rabun and fishing off the steep rocky outcroppings. There I caught my first warmouth bream. It looked like an oversize bluegill with a big mouth. We took it home and cooked it as a supplement for suppertime. My great Aunt Cleo, Winifred’s mother, cooked on a wood stove. One of our jobs during the day was to cut kindlin’, small pieces of wood, for her to put in the stove fire. Guess everything turned out OK, as I don’t ever remember being hungry. No, come to think of it, no matter how much I ate, I was always hungry, but that’s another story.

Enough about the cane pole. This story is about my Uncle Ben.

In the fall, around the time of my birthday, when I turned 11, my Uncle Ben came by the house one afternoon. We lived in a little house in Toney Valley, a subdivision in South DeKalb County, and he asked me if I would ride with him to downtown Atlanta and help him pick out a rod and reel. Wow, I was thrilled. We drove down to Sears and Roebuck on Ponce De Leon Avenue across from the old Atlanta Cracker’s ball park. When I was a senior in high school, I played baseball for the state championship in that old park and got a triple on my first at bat. That’s another story also. Back to the visit to Sears. We picked out a Ted Williams’ model Shakespeare open face reel, a matching rod, spooled it with braided nylon line, a little plastic Old Pal tackle box and even put a few hooks, a box of split sinkers, a red and white plastic clip-on float and one Lazy Ike lure for bass fishing. I was so proud to be able to have a hand in such crucial choices, and, was surely grinning ear to ear. Uncle Ben was all fixed up. He’d probably spent $15 all at once on fishing tackle and I was impressed beyond belief, never having witnessed such extravagance before.

We parked in the driveway at my parent’s home, the driveway was so short it could only handle two cars at a time. I piled out and ran into the house to show off all Uncle Ben had bought. After the description and viewing all the selections, Uncle Ben fell silent. He’d had the idea all along. Once all the fabulous purchase had been lined up neatly for all to see, he gave it to me.

That was 66 years ago. Uncle Ben is gone now. He died on my birthday 11 years ago, but here I am telling the story to you. Why? Because that event is so marked in my memory and has for so long and meant so much to a little wide-eyed fisherman, I shout it out again to encourage you to be an Uncle Ben to as many little boys and girls as you can. Take the challenge, follow his lead. Make a little boy or girl happy with an outfit to fish from the bank of a small pond or creek. Maybe they’ll write about it one day. 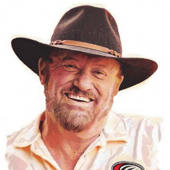 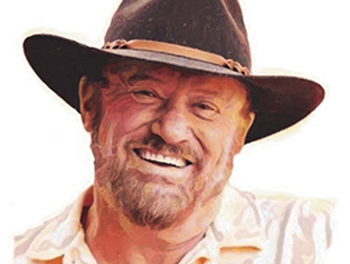