Pinckney Island is a special place for nature lovers 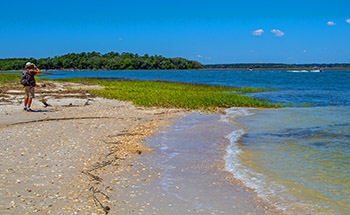 A man on the shore watching birds at White Point, Pinckney Island

Since the pandemic has subsided, everything in the outdoors has become popular with the emerging masses of human prisoners. Therefore, nowhere could be more fulfilling or breathtaking to this crowd of nature seekers than the Pinckney Island National Wildlife Refuge, located near Hilton Head Island in Coastal South Carolina. The refuge includes Pinckney Island, Corn Island, Big Harry Island, Little Harry Island, Buzzard Island and numerous small hammocks.

This picturesque island is located on Highway 278 between the two bridges that connect Hilton Head Island to the mainland. For more information visit the Pinckney Island page of the U.S. Fish & Wildlife Service website. The refuge is open seven days a week from 30 minutes before sunrise to approximately 30 minutes after sunset.

From 1801 to 1815 the island was part of a plantation owned by Major General Charles Cotesworth Pinckney, a prominent South Carolina attorney. From 1937 to 1975, when it was donated to the U.S. Fish and Wildlife Service, Pinckney Island was privately owned and managed as a game preserve.

This national refuge consists of more than 4,000 acres of diverse terrain including salt marshes, freshwater ponds, forest, tidal creeks and a cornucopia of birds and low country wildlife. In total, more than 14 miles of walking and bike trails are available to the public at no charge. However, bathrooms don’t exist on the island and no water or refreshments are available in the refuge.

The trails are pretty smooth, comprised of dirt and gravel, but if it rains, a lot of the pathways become mud. I would suggest wearing protective footwear, long sleeves and long pants because of insects, especially ticks. Poisonous snakes live on the island, but are rarely seen. Alligators are seen around all of the freshwater ponds, but if you keep your distance, they are not a threat.

Several loop hikes are possible within the park, but none of these begin until after a one-mile walk from the parking area. So, remember that you’ll have a minimum of two miles walking just to get in and out of the park. Other hikes like Skull Point to the south are more than four miles round trip, and White Point to the north is nearly eight miles round trip. To visit some of the ponds at the center of the park, plan for about four to six miles as well. Therefore, if you wish to do it all you could be in for a 10-mile day. All of this refuge can be made much easier and efficient by riding a bike.

Birdwatchers and wildlife photographers find the Pinckney Island National Wildlife Refuge to be a perfect place for their hobbies! In fact, most knowledgeable birdwatchers claim that they see an average of 40 to 60 different bird species on every trip. An abundance of white ibis, several different types of herons and egrets frequent this refuge constantly as well as many other domestic birds, raptors, wading birds, ducks, geese and migratory birds.

The only way to top off an unforgettable trip into the natural beauty of the South Carolina Lowcountry is to awaken your taste buds with a visit to the Skull Creek Boathouse Restaurant (SkullCreekBoathouse.com). The beautiful vista looking across the marsh to Pinckney Island, especially at sunset, will give you an indelible memory of your visit. You can choose to dine indoors or outdoors to feast on mouth-watering Lowcountry-inspired cuisine masterpieces that have appeared on the Food Network and have received local and national awards.

The area is not more than a five-hour drive from Atlanta. Pinckney Island National Wildlife Refuge is a one-of-a-kind outdoor experience that has vanished from most of the country!