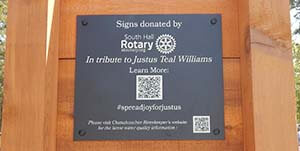 The tragic death of 2-year-old son Justus Williams three years ago was the catalyst for a new approach to informing the public about the dangers of E. coli in Lake Lanier, thanks to South Hall Rotary and Hall County Parks and Recreation.

On May 17, 2019, Jeff and Jess Williams had taken their three sons to Don Carter State Park for a family swim. Eight or 9 days later, 2-year-old Justus became ill with symptoms similar to a stomach bug. Following several trips to doctors, including to Children’s Healthcare of Atlanta, young Justus was gone, the cause a mystery.

“It would be more than two weeks later before we learned the cause of his passing,” said Jeff, a Gainesville native and business development manager for Conditioned Air Systems. “When I saw an article in the paper that there were high E. coli numbers at a park upstream from River Forks, I contacted the Centers for Disease Control and Prevention which had been investigating our case. Within a few days, we learned that the cause was a rare type of E. coli that is especially dangerous to children under age 4.

“I’ve lived up here all my life and I hadn’t realized the dangers of E. coli until this happened,” he said. “Since then we have learned so much, including that E. coli is much higher immediately after it rains and that there are groups testing regularly and posting test results.”

Williams’ fellow members of South Hall Rotary have initiated a program to help communicate a message of safety and water quality at Hall County Parks and marinas. Working with the CDC and Hall County, the club has created signage with “Share the Fun, Not the Germs” to offer tips and information about possible water quality issues in Lanier. The signage is both in English and Spanish.

The signs also warn that:

If your body’s ability to fight germs is affected by a health problem or medicines, check with your doctor before swimming. Additionally, the back of each sign will have a QR Code that links directly to current water quality and bacteria level reports.

The first sign was installed at River Forks in April; others in line for signage include Laurel Park, Cherokee Bluffs Park, Williams Mill Greenspace, Aqualand Marina and Sunrise Cove Marina. Discussions are underway with sister Rotary Clubs, governmental bodies and other partners around the lake to get these signs installed as well.

“Our family is still affected by what happened to Justus,” Williams said, “but knowing that this signage and increased awareness will make sure that other parents don’t have to walk in our shoes may save a life.”

For more information about South Hall Rotary and how you can help with this project, visit www.shrotary.org.

Stakeholders offer a way forward but are states interested?