A simple way to save birds: clean birdfeeders 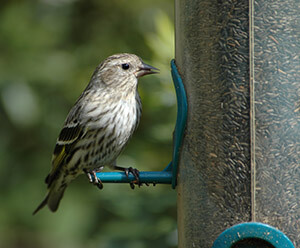 A Pine Siskin perched on a feeder.

Sick birds are occasionally reported in backyards across Georgia. A common denominator in these incidents is feeders and feeding areas that are not cleaned regularly, according to the Georgia Department of Natural Resources.

Birds are at risk from a variety of diseases that can flourish when birds flock to neglected feeders.

Wildlife biologist Todd Schneider of the Georgia DNR said the public can help by cleaning their feeders regularly. “A hygienic bird feeder can reduce the risk tremendously.”

Conditions in and around feeders help spur sicknesses ranging from conjunctivitis to avian pox.

Bacterial diseases are transmitted orally and through the accumulation of fecal matter beneath feeders. Birds infected with salmonellosis, the disease caused by the bacteria salmonella, often act lethargic and are easily approached, although other infected birds may show no symptoms.

Birds with conjunctivitis have crusty-looking eyes, may lose their sight and often remain perched on feeders even when approached.

Fungal issues such as aspergillosis, which can cause respiratory distress in birds, are often the result of a buildup of wet and moldy seed hulls beneath feeders.

Avian pox causes wart-like lesions on a bird’s face, legs or feet. More severe cases can cause lesions in their throat, compromising their ability to breathe and eat and sometimes leading to secondary infections. Avian pox can be transmitted from bird to bird by mosquitos, as well as between sick and healthy birds at feeders.

“We see a lot of issues involving salmonella,” said Schneider, an ornithologist with DNR’s Wildlife Conservation Section. “Salmonellosis and aspergillosis are not unusual among feeder birds.”

What you can do

Where bird feeders, feedings areas and even birdbaths are concerned, these and other debilitating illnesses can often be prevented with proper, routine hygiene. Schneider recommends the following: Clean feeders weekly using a 10-percent bleach solution – one part bleach to nine parts water – and rinse them thoroughly. After washing, let the feeders dry completely. (Always wear protective gloves while cleaning feeders, feeding areas and bird baths, and wash carefully afterward.)

Rake up bird seed, hulls and fecal matter beneath feeders two or more times a week. Wear a mask to avoid inhaling fungal spores stirred up by raking.

If you have multiple feeders, space them out to help limit gatherings of birds.

Move feeders regularly. A move as few as 20 feet away lowers the risk of disease transmission.

Empty and clean bird baths every two days when bird visitation is heavy. (This also discourages breeding mosquitos from using the bath water.)

What to do if you or neighbors see sick birds at your feeders? Schneider said you can help prevent the spread of disease by taking down the feeders for a week, which will encourage birds to disperse.

Noting that “not all bird feeders are equal,” he also offered a few suggestions about feeder designs. “Plastic and glass feeders are significantly more sanitary and easier to clean than wood feeders, which can absorb moisture,” he said.

Schneider stressed the importance, too, of reporting widespread disease to DNR. “A single dead bird isn’t a cause for alarm, but four or more dead birds in a short amount of time could signal a problem and should be reported to DNR’s Wildlife Conservation Section.”

Report incidents to Todd Schneider at todd.schneider@dnr.ga.gov. Do not handle dead birds with bare hands.

Info: Courtesy of the GA DNR

Algae blooms, pollutants on the radar for lake groups