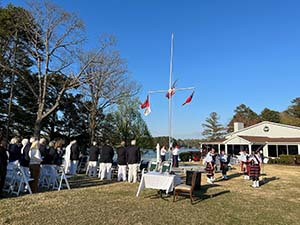 University Yacht Club celebrated Opening Day on April 2, an event that showcases several nautical traditions. The Empty Table, set for a guest, represents the friends and members who have “crossed the bar” and are no longer living; the club’s bell was rung to honor those members who had passed in 2021.

The Atlanta Detachment of the US Coast Guard Pipe Band performed several songs throughout the program. New officers were recognized, and former commodores were present to be thanked for their continued service. New members were introduced. Flag raising, the blessing and commissioning of the club’s sail and power fleets preceded dinner.

Photo: by Pamela A. Keene

Restaurant raises funds for ‘Believe With Me’