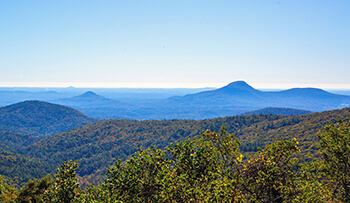 View of Mt. Yonah from the Richard Russell Scenic Highway.

My first pre-teen trips to the area around Suches, Ga. were with my father and my Uncle Bob to pursue the abundant and spectacular trout that inhabited the picturesque bubbling brooks. Later, as a budding race car driver, I honed my driver skills at high speeds on the intricate curves of each road leading to Suches. This education of every imaginable corner would pay off for me many times when racing the best drivers in the world on the eclectic race tracks throughout Europe from 1960 to 1970.

Even today, the Walter Mitty dreams of motorcycle riders and car racing enthusiasts draw thousands to test their skills on the plethora of cornering opportunities leading to the Valley Above the Clouds! Because of the inherent dangers, many destroy their cars or motorcycles. Or worse, be injured or killed. 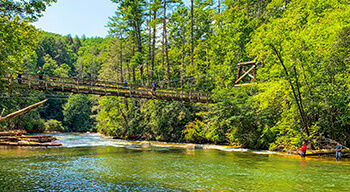 Suches is an unincorporated area in Union County with a height above sea level approaching 3,000 feet, and is one of the most elevated places in the state. The climate, land and way of life in this charming farming neighborhood are laid back. It is the birthplace of Arthur Woody, a forest ranger who was a prominent personality in the early history of Chattahoochee National Forest. Suches is located about a mile from the Appalachian Trail as it goes through Woody Gap.

For those who come for the stunning beauty of this mountain area, it is famous for its scenic views and abundant outdoor activities. If you enjoy camping, canoeing, picnicking, hiking, fishing, hunting, horseback riding or just breathing the clean mountain air, Suches is your kind of place! Within a few miles of the center, you can visit the Toccoa River Swinging Bridge, the historic Woody Gap School, Lake Winfield Scott, Preacher’s Rock, Deep Hole Recreation Area, Sosebee Cove, Dockery Lake and thousands of acres of the stunning Chattahoochee National Forest.

A visit to the Toccoa River Swinging Bridge is visually rewarding, but be patient and take it slow on the last three very bumpy miles of a dirt road. After parking your car, it takes a half-mile hike to arrive at the bridge that really does swing over the rushing waters of the Toccoa River.

Where to have a good meal is always the concern of people traveling to remote mountain areas, but in Suches I have two great recommendations ­– especially if you like hamburgers! The first one is located less than a mile from Lake Winfield Scott and is known as Bootleggers Grille (706-747-1007). The other one is on the way to the Toccoa River Swinging Bridge and it is known as Wildcat BBQ and General Store (706-747-3855). 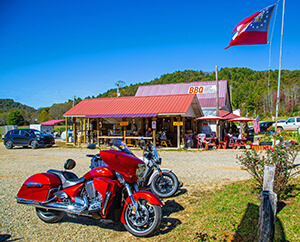 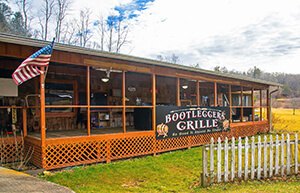 Suches provides the perfect nearby getaway for a vacation or long weekend and its close proximity to so many places of interest keep tourists occupied and away from the buzzing sound of cities. This beautiful valley above the clouds is heaven for numerous outdoor pleasures that for ages has lured people to return many times! 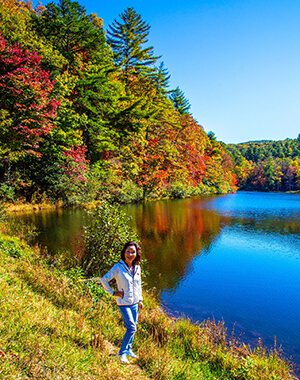 Linda Lee on the open section of Lake Winfield Scott. 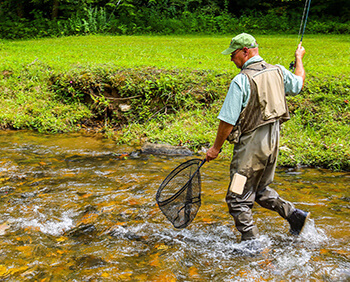 Landing trout in a stream near Suches.