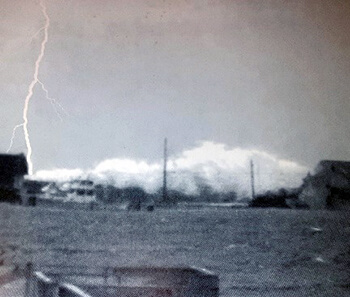 Lightning strikes as surf splashes 50 feet into the air as a wave hits the seawall in Sea Bright, NJ during the December Storm of 1992. The telephone pole in the center of the photo was 50 feet high.

My mother was always very opinionated and had little use for people who didn’t agree with her (me included). One of her pet peeves was the snowbirds who left the pleasures of a dismal winter on the Jersey Shore for the sunny climes of the South. She derisively referred to Florida as the “Elephant’s Graveyard” after the legendary place in the old Tarzan movies where all the old elephants go to die. All this stopped when she and my father bought a condo in Miami Beach, then each October, the pachyderms would head south!

This left my brother to run the marina/bar/restaurant, which was no problem because all the boats had been hauled out and safely put up for the winter and the frenetic pace of summer on the shore had slowed to a crawl. All the tourists had gone home, and the wind howled down the boardwalk. We could now enjoy six months of relaxation until the first warm weekend in spring when everyone demanded their boat be put back in the water.

The one notable exception was the December storm of 1992. This was when a snowstorm in the Great Lakes headed east while a nor’easter out of Nova Scotia moved down the coast. Meanwhile another storm that had begun as dust blowing out to sea off the Sahara Desert moved north westward until they all collided off the coast of New Jersey.

The marina is on a narrow peninsula between the Shrewsbury River and the Atlantic Ocean. Consequently, every time there is a nor’easter, the water comes in at high tide, and the pressure of the wind keeps it from going out. Then the next high tide comes adding more water. Add to that a full moon and a snowstorm and you get a bona fide weather phenomenon. The water rose up to five feet deep in the parking lot where the boats were stored and about 25 of them floated off their chocks. Since they had all been winterized, the plugs were out of them, so they all sank!

Fortunately, most of them sank in the parking lot so we could pick them up and put them back where they belonged until we could do the saltwater salvage routine on the engines.

However, eight boats had floated out into the river in all different directions. When an event like this happens, it affects all the marinas, not just ours, so all the marine salvage companies in the area were totally backlogged. Consequently, we had to get the boats back ourselves.

Since I was the only one who had a wet suit that fit me, I took two weeks’ vacation from my real job, and my brother and I, assisted by a couple of “yard monkeys” got down to work. We had our tow boat still in the water and a huge pump like you would see on a fire truck, plus all kinds of lines, cables, winches, come-alongs etc.

I lived across the river and each morning I would park at the bridge, and as the town was under martial law, I would show my ID to the National Guardsman at the bridge and explain what I was up to. He’d allow me entrance and since the road was still flooded, I’d slosh through the calf deep water the half mile or so to the marina and off we’d go out on the river to find our missing boats.

We got the first seven back with a moderate amount of trouble, but the last one gave us fits. It was a 28-foot cabin cruiser that had drifted about 500 yards in on an island. We rigged lines and block and tackles and pulled from every direction. We finally jacked it up and removed the rudder, propeller and shaft to make it easier to pull but still to no avail. We also lost a day’s work when someone came along during the night and stole all our ropes and tackle, but that’s another story.

This was the coldest I can remember being. The air temperature was near freezing, and the wind was constantly blowing at about 15 knots. When I got out of the water, ice would instantly freeze on the outside of my wet suit. The only way to get warm was to jump back into the water!

We finally had to charter the 85-foot research vessel from the NOAH Marine Lab on Sandy Hook. They had an enormous winch with miles of cable for taking samples from the deep ocean. We rigged a harness around the stranded boat and as the winch on the research vessel started to crank the boat started to move with a jerk, then faster and faster than we could even run until with a mighty splash, she hit water and floated! We got her safely back to the marina and addressed the final problem.

A 20-foot sailboat had floated up over a piling and became impaled! We had discussed several solutions including pulling the piling out and cutting up the boat where she lay. The fellows on the research vessel had another idea. They swung their big crane over top of the impaled boat, put a sling around her and lifted her straight up and off the piling, then deposited her on shore! Problem solved. There’s nothing as satisfying as working with professionals!

One sad casualty of the storm was discovered a couple of weeks after most of the other things had been cleaned up. My brother’s Honda Gold Wing motorcycle had been sitting in the garage. We didn’t even think about it during the mad rush to solve the obvious problems. When we went to move it, rusty salt water poured out of the exhaust pipes. It was beyond hope of salvage. He eventually replaced it but we all miss that machine.

By the time our parents returned from Florida in the spring, the marina was back together, and it didn’t appear like it had been anything but a normal winter. My father made a comment that “I thought you had a big storm up here. It couldn’t have been that bad. Why were you complaining?” (My mother wasn’t the only one in the family that was opinionated.)

Fond memories of family traditions and ‘the great pumpkin’

Recalling the story of a unique business model