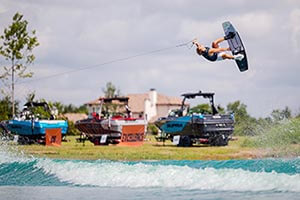 Earlier action during the Pro Wakeboard Tour that culminates with its championship on Lake Lanier later this month.

The top wakeboarders in the world converge on Lake Lanier Olympic Park on Saturday, August 21, as the final stop of the 2021 Pro Wake Tour.

“We’ll have the top 16 international wakeboarders and the top six wakesurfers in the world at this event,” said Priscilla Scollin, marketing official with the tour. “They will have come from three other tour events from earlier this summer to compete for top honors.”

Cash prizes for the tour’s events, including the finals at Lake Lanier, totaling more than  $55,750.

The tour is powered by Supra Boats.

For more information about the tour, visit ProWakeboardTour.com.