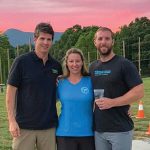 John and Elizabeth Crumpton with son and Tantrum CEO Ross

I’m fascinated with stories about entrepreneurs who turn a hobby or passion into a successful business. The story of Tantrum begins with Ross having a conversation with his father, John, in 2017 after doing some homebrewing and developing a greater passion for beer and brewing. From there, it became a family affair with his father, Elizabeth his mother, and his two brothers Will and Ben, who continue to uniquely pour into the brewery. Shortly after talking with his father, Ross began creating a business plan while researching other breweries and talking to financial executives. It wasn’t long before they secured funding and started their search for property. Their search led to 5.23 acres east of Cleveland in an ideal location off Helen Highway. They built an impressive rustic, industrial brewery and taphouse with plenty of outdoor space for all to enjoy.

In February 2018 they broke ground and by March 2019, they opened the brewery to the public, which according to Ross, was their greatest accomplishment. Ross and his brothers grew up in White County so support from the community followed suit for Tantrum. Ross said one thing that pleasantly surprised him was that licensing to open the brewery was not as difficult to obtain as he imagined. 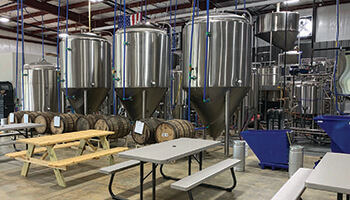 The Crumptons’ vision for Tantrum is to cultivate a family-friendly environment so customers can have good conversation over great beer. When asked about something that makes Tantrum unique, Ross said that the North Georgia Mountain location, which includes beautiful views of Yonah Mountain and Pink Mountain, offers a special experience for visitors. The hops growing vertically on the property also contribute to the pleasant outdoor atmosphere. Many breweries are located near mid to large-sized cities and unable to offer such views. The other key to the brewery’s success is the tap-room staff who have a passion for making great beer.

I imagine every small business encounters large hurdles and Tantrum encountered their largest hurdle in March of 2020: the coronavirus. Tantrum closed for two months during a time when they planned to host a one-year anniversary bash to celebrate with their greatest supporters and customers.

Flights of Beer at Tantrum – Photo by Don Duval

COVID may have slowed them down, but it certainly didn’t hinder their desire to serve great beer to their customers. The Crumptons refocused their efforts temporarily from serving in the taproom to selling their beer via customer pick-up in the parking lot. This allowed them to keep their doors open and their employees working. Tantrum was able to celebrate their anniversary bash and is now open and following safety protocols, so you can enjoy a cold beer or a flight of brews on the premises, inside or outside.

I was curious about the business model of a startup brewery and learned that most successful breweries require a taproom to generate cash flow. Once the cash flow increases, the brewery can grow. Distribution of the beer is the next step, but that can be a challenge for a small startup brewery. Ross’s plan, however, has always included successful distribution which requires great beer with a great taproom. Mission accomplished!

Coming soon: Two great beers featured in November: Centerfold: Single hop beer with Vicks’ Secret (a type of Hop) from Australia which is high in acid and aromatic. The other beer (to be named soon) is a fruited sour ale similar to a
Goza style with a little salt added, resulting in a slightly sweet and tart surprise.

Until next month, think globally and drink locally. 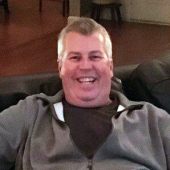 Georgia native Don Duval grew up going to Lake Lanier and keeps a boat at one of the marinas. He and his wife have a passion for good wine, good food, and of course, the lake. 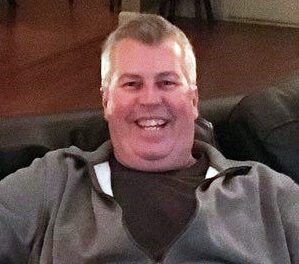 The wine, the view, and yes, fainting goats

Crane Creek Vineyards: a taste of Italy in Georgia

A notable wine cellar in Clayton