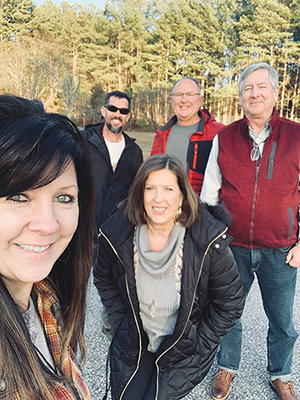 “The boat and trailer need a bit of work and that’s where the Friends group comes in,” said Stephen Cahn, navigation ranger with the Corps. “The Friends group will spearhead this work, including rewiring the trailer and acquiring new tires. Once complete, the boat will be donated to the Corps to help accomplish more work here.”

The boat will most likely be used for water safety programs, including moving and installing shallow-water markers and taking water samples around the lake.

“Because this is an unfunded item in Lake Lanier’s federal budget, the Friends group will handle upgrades and ongoing maintenance,” he said. “The group has been a significant help to our work at the lake since it was formed three years ago.”

For instance, the group has raised funds to support its Corps-oriented projects by selling bundles of firewood in the campgrounds, ice and soft-drink machines in the parks. It maintains the parks’ laundry facilities and collects those funds which are then used for various projects throughout the year.

Life-Jacket Loaners
“The group has been a huge supporter of our Life-Jacket Loaner program, donating more than 1,300 life jackets for public use over the past two years,” Cahn said. “We always start the season with fully equipped loaner stations at our 14 stations at 11 parks, but as the year progresses, these need to be replenished. This is possible through public donations of gently used PFDs as well as monies raised by the Friends that are used to purchase them.”

He said that in all, more than 400 life jackets are needed each season. “They’re kept in the parks with the intention of people using them, and if they don’t have a life jacket, we’d rather the borrower keep it and continue to reuse it,” Cahn said. “Our safety message about wearing life jackets saves lives is so important. Wearing a life jacket can save lives.”

The Corps needs life jackets in a full range of sizes, from infant and child to youth and adults. Several donation locations are set up around the lake: Hideaway Bay, Bald Ridge, Gainesville Marina and University Yacht Club.

“Especially at this time of year, we encourage people as they winterize their boats to take inventory of their PFDs. Perhaps their children have outgrown their life jackets, or they just want to get ready for next year by purchasing new ones,” he said. “Please think about donating your older PFDs.”

“Michael Moon with the Pootoon is one of the Friends board members and he has been vital to ensuring that the donated jackets get to all the loaner stations,” Cahn said. “It’s a big job and one that requires regular monitoring.”

“We are very interested in expanding the membership in Friends of Lake Lanier,” Cahn said. “Please get it touch with us so that we can provide further information and help get you involved in the betterment of recreation at Lake Lanier.”

The group operates with a board of directors that meets regularly with the Corps. The president of the group is Alysia Cahn.

“Many people don’t realize that park entry fees, dock permits, camping and other fees are returned to the Federal General Fund in Washington and do not stay here at Lake Lanier,” Cahn said. “Now that the Friends group has a formalized relationship with the Corps, some of the funds are kept local and can be used directly for the benefit of Lake Lanier.”

The Friends of Lake Lanier (FLL) is a non-profit, 501(c)3 organization that has a Cooperating Association Agreement with the Army Corps of Engineers (COE).
For more info, contact Stephen Cahn at 770 945-9531 or email: friendsoflakelanier@gmail.com.