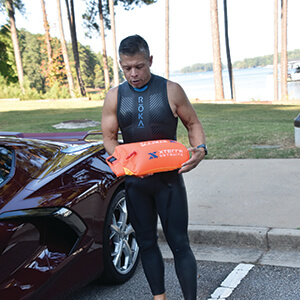 From the fascinating to the remarkable, Lake Lanier harbors many personalities and places along its shores. Lakeside presents “Shore Lines” – stories about people who live, work and play around the lake and the places that make the area special.

Over the past several months, if you had been boating near Big Creek and Holiday Marina, it wouldn’t have been unusual to see a bright orange buoy moving along the shoreline and the no-wake markers. On closer inspection, that buoy was attached to a swimmer named Alonzo Borja, a 52-year-old former NCAA swimmer and nationally ranked bodybuilder.

With bundles of medals to his credit, these days Borja is training in Lake Lanier for his fourth Ironman, slated for Panama City, Florida, on November 7. He’s also completed six half-Ironman events, all over the past three years.

“Lake Lanier is the perfect place to train for the open-water part of the competition,” said the Buford chiropractor last month while preparing for a late-afternoon swim. “The waves from the boat traffic simulate the wave action we’ll experience in the Gulf of Mexico as we swim the 2.4-mile portion of the Ironman in Florida.” 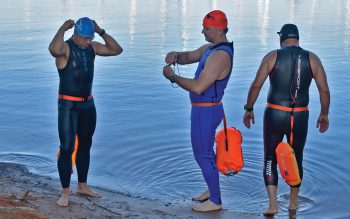 On this particular day, Borja and two other athletes – Scott Merrifield and Jose Gonzalez – prepared to swim the distance over 90 minutes or so. The water in the cove was comfortably cool and calm for a Thursday afternoon.

Heading to Florida
“We’re all going to Panama City,” said Merrifield, 48, who works in IT. “I’m doing my first half-Ironman and Jose is on his second full. The training has been tough and, personally, I will just be happy to complete the competition.”

Gonzalez, 57, has completed two half-Ironman competitions. As his second full, the trip to Panama City is helping him meet his goal.

“I’m doing these competitions with a goal in mind,” said Gonzalez, who has also completed two half-Ironman events. “I want to get to Kona and the World Championships.”

The Hawaii competition began in 1978 on Oahu, moving to Kailua-Kona in 1981. It is the World Championship Ironman. To qualify, athletes must have completed at least 12 full-distance Ironman races. An official Ironman competition, sanctioned by the World Triathlon Corporation, comprises three consecutive sections: a 2.4-mile swim, usually in open water;  a 112-mile bike ride and a 26.22-mile marathon run. Usually limited to an overall completion time of 16 to 17 hours. In 2019, German athlete Jan Frodeno set the World Championship course record of 7 hours, 51 minutes and 13 seconds. Swiss athlete Daniela Ryf set the women’s course record in 2018 by finishing in 8 hours, 26 minutes and 18 seconds. Most competitors clock completion times of between 11 and 13 hours, depending on age.

Staying fit via Ironman
For Borja, doing multiple Ironman events is a way to stay fit, combining several disciplines. “I’ve always been an athlete,” he said. “It just comes naturally for me to stay active.”

As a competitive swimmer at the University of Rochester, he began powerlifting and bodybuilding. Soon he qualified nationally as a bodybuilder. “I could have gone pro in my early 20s but decided to become a chiropractor.” 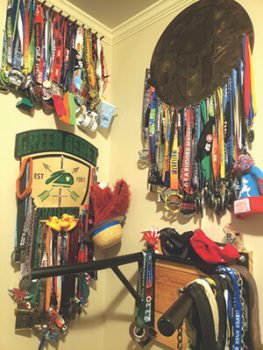 He moved to Georgia where he attended Life College in his mid- 20s, graduating in 1998. By June 1999, he had opened his practice in Buford: North Georgia Spine Center. Here he treats patients from all walks of life, including athletes. His office “Wall of Fame” boasts photos of Olympic, collegiate, local and professional athletes.

“For a long time, I thought that lifting weights was all athletes needed to stay fit, but when I decided to start running, I realized fitness was much more,” he said. “I also was an avid cigar smoker for about 20 years. A good cigar two or three times a week wasn’t healthy, but a good cigar is much less toxic than cigarettes. In fact, I started running so I could keep smoking my cigars.

“The first time I ran, I went about 50 steps and almost collapsed,” he said. “Then I realized ‘I am a smoker,’ and decided to quit. Even now, with my variety of training, I still suffer from the consequences of smoking the cigars.”

He continued to run, building up his endurance and distance. “Then I asked myself, ‘What can I do to run better?’ It was like a lightbulb turned on and by 2015, when I was 45, I stopped smoking.

From doing weekend races around the Southeast, he soon needed another challenge. “A friend introduced me to Spartan Military races, and got me hooked on doing obstacle courses,” Borja said. “As I progressed I was doing up to three races each weekend. I’m very competitive and I got pretty obsessive about it.”

Battling injuries
To make it to three races in a weekend, sometimes in three different states, he’d sleep in his truck. By 2017, Borja had qualified for the Obstacle Course Racing World Championships in his age group.

Finally, injuries caught up with him. “Over a couple of years, I had three major injuries that required surgery. My bicep pulled off the bone and had to be reattached. Then I had a complete muscle separation on my right shoulder; another surgery. “And my left rotator cuff will be operated on five days after I get back from Panama City.”

Still, Borja continues to train, doing plenty of stretching and prep before each session. “Every time I lift my arm to swim, I feel the pain, but I know I must just keep going.”

He also continues to work full time in his practice and spend time with his family: his wife Carmen Elisa, and his two children who are both in high-school.

“In all honesty, we thought that all the competitions in 2020 had been canceled because of COVID-19,” Borja said. “Then in September, we were surprised to receive a letter from the Panama City event that it would take place. All of a sudden, we were faced with a compressed training window of about six weeks.”

The three sometimes train together and sometimes separately. For Borja his week consists of one to two 2-mile open-water swims, three bike rides that total more than 150 miles and 20 to 26 total miles run each week.

“An Ironman, or any marathon event, requires constant nutrition at least every 10 miles, so I’ll either have food or liquid in my mouth to keep myself going,” he said. Ironman competitors’ ages range from a minimum of 18 to older than 70. Events are set up in age groups.

As he reflected on his pursuit of the Ironman, Borja shared a story about one of his patients who became a mentor and friend.

“Back in 1978, Henry Forest from Grayson was one of the first competitors to cross the line at the original Ironman in Oahu and he was a patient of mine before he died several years ago. He never knew that I am now competing in Ironman events,” Borja said. “But you know, every time I race, I know in my heart that he’s pushing me to do my best. He’s watching over me and sending me encouragement.” 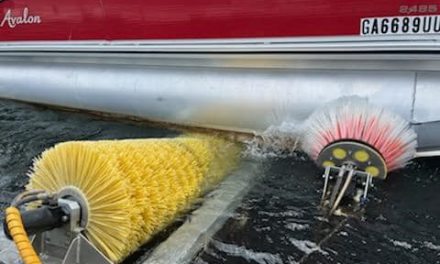 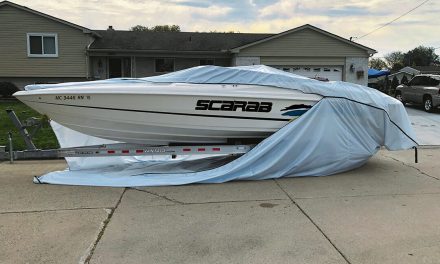 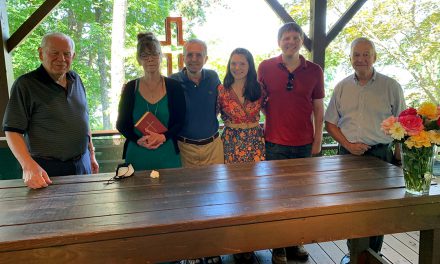 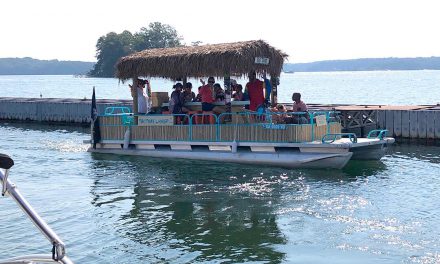