Happy New Year everyone. Hope you all had a good holiday season. Our December certainly had some interesting weather.  Record heat with temperatures in the upper 70s followed by cloudy and rainy weather for the latter half of the month.

The current weather patterns favor cold and wet conditions.  We’ve seen wedge after wedge for the past several weeks so I thought this might be a good opportunity to explain what a wedge is. 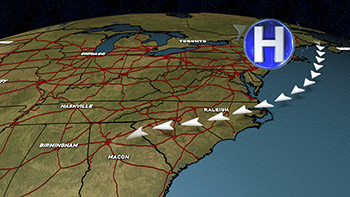 Wedge is a term used by meteorologists when a high pressure system is over the Appalachian Mountains up to southeast Canada. As a high pressure system slides to the east it runs into the Appalachian Mountains. As a result, thick, dense cold air piles up on the eastern side of the range (think of cold dense air as syrup). As the high pressure system’s winds rotate in a clockwise motion, it draws this shallow cold air from the north down to the south, where the mountains funnel it down into north Georgia. The scientific term for this is “cold air damming,” because the mountains act like a dam. Hall County is the bullseye for the strongest part of the wedge.  How many times have we seen temps in Atlanta – outside the wedge in the mid 60s – while temperatures around Lake Lanier are in the low 50s.

What worries me most this time of year is when a weather disturbance to our west draws warm gulf air northward. Remember when I said to think of the cold dense air as syrup. You can think of warm air as feathers. When warm air from the south tries to move north and push the wedge out, it just can’t. It’s trying to move syrup with a feather. As a result, the warm air glides up and over the top of the wedge of cold air. Then the problems can begin. Sometimes rain will fall into the shallow layer of dry cold air, where evaporation will occur, making the wedge stronger and colder. There are those times, especially this time of year, when it can get cold enough for ice to form on roads and trees.

There are other times the wedge can be a lifesaver. When we see severe storms along a cold front, the kind of which brought those deadly tornadoes to the south last month, they will move into the wedge and fall apart because of the cold, dense, dry air.

There will likely be many more cold air wedges in the weeks ahead so I thought you might like to know the dynamics involved and why it usually gets so miserable at times around the lake.

Anything can happen during February

Wishing Glenn Burns the best in his retirement