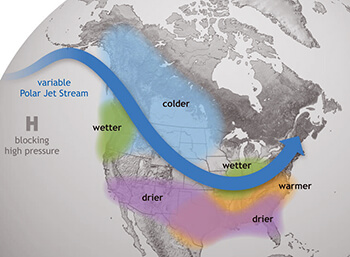 There is a 90 percent chance La Niña will continue for us again this winter.

It is not a storm, but a climate pattern that occurs in the Pacific Ocean every few years and impacts weather on a global scale. You know how warm it was the week of Christmas. That was a direct result of La Niña. The outbreak of tornadoes that pulverized Kentucky and neighboring states was also a direct result of this global weather pattern. We saw the highest gate to gate wind ever measured on Doppler radar, the difference between the wind coming toward the radar and away from the radar, at 303 mph! It was also a record for the longest continuous track from the single tornado on record.  That EF 3 with 200-220 mph winds was on the ground for 227 miles!

This is going to be the second La Niña winter in a row, a not-uncommon phenomenon that we call a “double-dip.” The most recent period lasted from August 2020 to April 2021. However, the biggest impact of La Niña tends to be felt during the winter. La Niña winters tend to be drier and warmer than normal across the southern U.S. and cooler and wetter in the northern U.S. and Canada. La Niña can also lead to a more severe Atlantic hurricane season. The 2021 season was the third most active ever. We had 21 named storms with eight impacting the United States.

I know you might be thinking with the warmer than normal temperatures we have seen this fall, our winter will likely be warmer too. You are correct. Warmer and drier conditions are very likely to continue. I also want to point out we have seen big surges of cold air and some of our biggest snows during La Niña years, so stay tuned everyone!

Glenn Burns has been writing for Lakeside for more than 20 years. He is the chief meteorologist for WSB-TV in Atlanta.

What are meteorological seasons plus hurricane predictions

This season’s leaf color is hard to predict

Looking back on March 2021 tornado outbreak

Preparing for a ‘cringe-worthy’ month