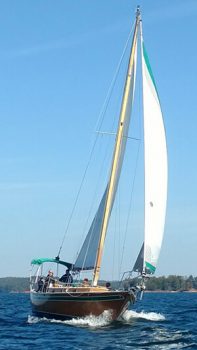 My family has owned and operated a marina on the Jersey shore since 1967. Every year a few boat owners would want their boats transported to Florida for the winter. This could be done by sailing down the inland waterway, which has a speed restriction and takes ages. To take the ocean passage, outside of Cape Hatteras, requires three US Coast Guard licensed captains for insurance purposes. Two of my brothers and I decided to get our captain’s licenses and get in on this offshore delivery service, as the pay was very good and at that time of year there is not much to do around the marina. After documenting our sea time and passing an excruciating eight-hour exam up at Coast Guard headquarters in New York, we were sworn in as US Merchant Marine Officers, licensed to command any vessel, sail or power up to 100 gross tons. A few years later my job transferred me down here to the Atlanta area and to my great delight, we have this beautiful lake with as much sailing as I ever had in New Jersey, except here it’s year-round! I thought I’d died and gone to heaven!

Here on the lake, Lord Nelson Charters operates a large wooden sailboat that y’all might have seen around over the years. Her name is Grendel, after the sea monster in Beowulf, and she’s a real beauty, 38 feet long, cutter rigged, built of West System Epoxy. She has a roller furling jib and lazy jacks on the main, with all the lines running back to the cockpit so she can be sailed single-handedly. She does just about everything you can imagine, such as half-day and full-day charters, picnics, sunset sails, corporate team building events, and weddings, complete with sailing off into the sunset. I’ve been lucky enough to have worked part-time as a charter captain on her for the past 25 years.

Last summer I had the pleasure of taking half a dozen delightful young women out for a “Bachelorette Party.” This was in the middle of COVID, and they explained that due to the pandemic, the wedding plan went from 350 guests down to an intimate affair of 35. The bachelorette party was also downsized to just the bridal party, but they were determined to have a good time.

They arrived dressed for the occasion with the bride wearing a white tee shirt and ball cap bearing large pink letters declaring her to be “BRIDE,” while the bridesmaids all had black shirts and hats stating “BABE.”

Social distancing was no problem on a 38-foot boat as they all stayed up in the bow and I sailed the boat from the cockpit back aft.

We had a fine sail for several hours and enjoyed one of our spectacular Lake Lanier sunsets, then they all went off to terrorize the natives around the lake.

This brings to mind a bachelorette party many years ago when I was working for a large manufacturing facility. My secretary was getting married to one of the guys who worked down in the plant, and for a couple of weeks before the wedding, all the guys talked about was the bachelor party, and how much beer they were going to drink, and all the strip clubs they were going to visit, etc., etc.

The girls (Before you call the PC Police, remember, this was the mid-1970s). Anyway, they were all feeling sort of glum about this, so I suggested they have a “bachelorette” party. Now, at that time, no one had ever heard of such a thing. They all said, “Oh no, we couldn’t do that” and I told them “Sure, you can, just invite all your female friends and relatives, tell them to bring their favorite music, get a few bottles of wine and champagne and order out for pizza. You’ll have a good time.” So, they did.

Meanwhile, two other salesmen and I chipped in and hired a male stripper to crash the party. The festivities were in full swing when he arrived dressed as a police officer, complete with badge, gun, baton, handcuffs and what looked suspiciously like a boom box. He had a warrant for the bride’s arrest which shocked everyone until they noticed that his handcuffs were covered in pink fur. Then he hit “play” on his boom box and started dancing and things really got wild!

All the younger girls were devastated because their mothers and aunts and grandmothers were all there and they didn’t know what they would think. Not so the older ladies! They were all going crazy, dancing with him, tearing off his clothes and stuffing dollar bills into his G string! Everyone had a great time and I suspect some of them still talk about it.

The morning after followed the night before, and the guys who actually made it to work were stumbling around completely hung-over, having spent half the night drinking beer and the other half throwing it up.

On the other hand, the girls were all giggling and laughing and whispering to each other things such as “remember how grandma looked wearing his hat” and “how about when Aunt Sophie tore off his shirt!”

I later changed jobs and lost touch with most of the old gang but bumped into the bride several years later and she thanked me again, saying that they still talked about it and the bachelorette party was the best wedding present ever.

Recalling the story of a unique business model