Low tech gets the job done when it comes to energy

All sailors know the exhilaration of using the natural motion of wind and water to get you where you want to go. For over 4,000 years man has harnessed this power to maintain civilization.

Water wheels irrigate crops, grind grain, and perform chores more efficiently than when done by hand. Now we have electric motors to do these jobs, but before World War II, a lot of rural Georgia had no access to the electric power grid, so they employed moving water to power machines.

There are three types of waterwheels, the horizontal, undershot, and overshot, as well as turbines which all work on the same principle. As water moves from a higher point to a lower point it loses a lot of energy, which can be easily captured. The most efficient type of waterwheel is the “overshot,” where the water is fed over the top of the wheel, and caught by buckets, thus using the force of gravity as well as the flow of the water to turn the wheel. This circular motion then turns a shaft which can power any number of machines.

Several years ago, I visited a rustic furniture factory in Costa Rica. It was powered completely by an overshot waterwheel! There was no electricity in the plant. The craftsmen worked by light from skylights and large windows and doors that stood open. The wheel was connected by gears to a long iron shaft about two inches in diameter running the entire length of the manufacturing floor. Constantly turning, it powered all the lathes, saws, planers, drill presses and sanders by a system of pulleys and wide leather belts. The place was tremendously noisy until siesta hour when the waterwheel was stopped, and the millpond was allowed to refill with water to power the afternoon’s operation.

Most of my working life has been spent visiting manufacturing facilities in this country, so this was a whole new experience for me. I felt like I had been transported back to the 1800s! 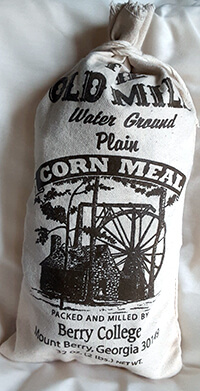 Here in North Georgia, most of the functioning water-powered gristmills are gone but there is a good example of an “overshot” wheel located at Berry College in Rome, GA. This wheel is 42 feet in diameter and is one of the largest in the country. It was originally located in Hermitage, a small manufacturing community near Calhoun, Ga. and was donated to Berry in 1930. Henry Ford provided the money to have the wheel moved to the college and build the mill. It has been grinding grain there ever since. You can see it operating, and also purchase grits, and cornmeal at the Berry store. (More info at: www.berry.edu.)

The water turbine was invented in the early 1800s and is about 40 times more efficient than the water wheel. There is a working water turbine at Nora Mill in Helen. Using the power of the Chattahoochee River, this mill started grinding grain in the 1870s and is still in operation using much of the original equipment including the original turbine and grindstones. All the products of the mill are available at their general store where you can also taste the different types of products including grits, cornmeal, and pancake mix. (More info: www.noramill.com.)

Fast forward to the 21st century, and hydroelectric power, generated by turbines using the natural motion of moving water, now provides 80 percent of Georgia’s electrical needs. This is not only good for the environment by lowering pollution, but as waterpower is a renewable resource, it does not deplete our fossil fuel supply.

Here on Lake Lanier, everyone is familiar with Buford Dam which is an integral part of that power generating system, as well as providing flood control downstream and giving us a great place to sail year-round.

The dam uses turbines powered by water from Lanier to generate 250 million Kilowatts of electricity per year. Although restrictions enacted since 9/11 won’t allow us to get up close and personal with the turbines and generators themselves, we can get an idea of the power contained in the moving water by viewing the daily release from the dam. Just before the release, sirens go off, much like an air raid or tornado warning. Then water comes out from under the dam faster and faster raising the height of the Chattahoochee River several feet in just a few minutes. It’s a kayaker’s dream and even for regular people, a nice way to spend the afternoon is to take a picnic lunch up to the dam and view the water release.

However, from my point of view, the biggest benefit of Buford Dam is the lake itself. With warmer weather coming I’m looking forward to spending more time out on the water, where I can personally harness some of that power.

And speaking of grits … remember the old movie “My Cousin Vinny?” Joe Pesci says: “I’m an old grits lover from way back. How do you like your grits, regular, medium or al dente?”

Unfortunately, the grits you buy in the supermarket, whether “instant” or “old fashioned” have had the germ removed from the grain to make into other products. Consequently, they have artificial vitamins and minerals added. If you want “real” grits, go to an old-fashioned grist mill.

Even though I spell my name differently than Cousin Vinny, I’m also “an old grits lover from way back.” A couple of my favorite dishes are shrimp and grits and cheesy, garlicky baked grits.

By the way, when you see “polenta” on the menu in a fancy restaurant, you are actually getting grits, but the difference between grits and “polenta” is about $20 an entrée!

Some early memories and other assorted tales