Autumn – when our coast is clear 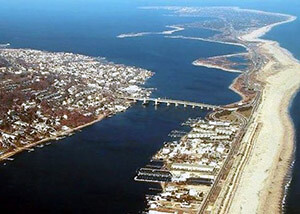 The Jersey Shore off-season. View looking north from Highlands and Sea Bright along the beaches of Sandy Hook.

I grew up on the North Jersey shore, and when I was offered a job transfer to Georgia, it took quite a bit of soul-searching to make the move. Four generations of us had grown up on top of that hill, just under the Twinlights Lighthouse, the highest point on the Atlantic Coast for a thousand miles each way. I thought about my ancestors. One grandfather left Armenia, another had left Poland and back in the 1840s another had left Ireland, so I made the move. I love Georgia, but this time of year I sort of miss the Jersey Coast in the off-season.

In the summertime, the roads and restaurants, and beaches are all clogged with tourists. We were close enough to New York City that a bunch of people could pile into a car and drive down for the day. They blasted loud music and tossed beer cans and McDonald’s wrappers out the windows and were a general nuisance. Unfortunately, the local economy depended on tourist dollars, so we all put up with it. I kept trying to figure out how to get the tourists to just send their checks down without having to deliver the money in person, but it never worked out.

However, after Labor Day, just as if someone had pulled a switch, the influx of foreigners would stop, and we had the place to ourselves! Jimmy Buffet has a song called “When Our Coast Is Clear,” which just about describes it. There are no more cars clogging the roads. The miles and miles of sandy beaches are free of people, except for an occasional surf fisherman, and the water is still warm enough to swim in. Once again, we could get around driving at the speed limit and get a parking space at the grocery store.

During the off-season, local bars and restaurants went way out of their way to provide excellent service and good prices, so they could keep their staff working and be able to pay the mortgage. My brother’s bar was closed on Mondays to allow his staff to recuperate from the weekend, so we would check out the competition. One of our favorite places offered an all-you-can-eat steak special Monday nights.

Casey Jones was a casual restaurant with a railroad motif, containing a lot of old memorabilia and pictures of steam trains. The management loved us because we were more or less well-behaved and drank enough beer that they didn’t lose any money on us. The waitresses loved us because we were good tippers and we loved it because it was always a good time.

We would each order a steak dinner. A nice cut of meat, well prepared with a baked potato, a big, tossed salad, and even a basket of freshly baked rolls. When we were done, we’d order another steak, and it would be just as good as the first, except it might be a slightly different cut of meat. (These were the pieces that would usually be sliced up for beef stroganoff or ground into hamburger.)

They didn’t provide to-go boxes on Monday nights, so I got this great idea to bring along a bunch of zip lock bags. I’d order my steak rare, and take one bite, then it would quietly disappear into a bag. I’d ask the waitress if she would think I was a pig if I had just one more. Pretty soon the pockets of my windbreaker were bulging with bags of juicy meat. I told my buddies to keep close to me as we walked out of the restaurant so no one would notice. But they kept bumping into me. Each time, my pockets would go “squish, squish, squish.” I didn’t know that when I was in the restroom, they had taken a steak knife and poked a bunch of holes in my zip lock bags!

Now there were usually some stray dogs hanging around the dumpsters of restaurants and this one was no exception. I was halfway across the parking lot when the whole pack took off after me! I managed to scramble up on top of my car in time, but then I was stuck there. (This was long before we all had remote clickers on our key fobs to unlock the doors).

My buddies, meantime were convulsed with laughter, thinking it was the best entertainment they’d seen in weeks! Finally, I took one of the bags and heaved it as far as I could across the parking lot, and when the dogs took off after it, I scrambled down into the safety of the car and made my escape. The story made the rounds, and I was a folk hero for a couple of weeks until some other idiot took over the title.

Here on Lake Lanier, there is no real cut off between the seasons. They all just slide gracefully into one another. We get some of our best sailing in the fall due to the winds, but hardly anyone notices the missing power boats. There are still comparatively warm days in winter when we hop into the boats and go out, just because we can. For diehard sailors, all the local sailing clubs schedule races and parties throughout the year.

Yeah, I miss those days up north, but some parts not so much as others!

Ending up in the perfect place to pursue my fun

Reminiscing on a different kind of Caribbean getaway

Shakleton, a tribute to toughness and survival