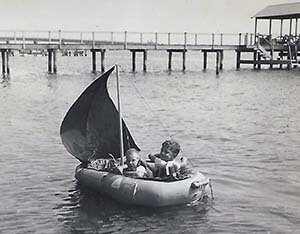 Vinnie and his brother sailing in their war surplus rubber raft.

When I was about 5 or 6 years old my father bought a war surplus rubber raft. It was designed to save a single pilot from a fighter plane if it was downed in the ocean. As I remember, it had a paddle and a red sail with a collapsible aluminum mast. My little brother and I would sit in it, and I would pull in the sheet and we would sail along the beach between two docks in knee-deep water as our parents sat under an umbrella a few yards away. When we got to the far dock, I would slack off the sheet and the tide would carry us back to where we started. Things were much simpler then.

In the little clam-digging town where I grew up, it was customary for a kid graduating grammar school to receive as a graduation present a small skiff with an outboard motor. My father bought me an old Barnegat sneak box, a specialized class that’s been around since the mid-1800s, but that’s another story. This boat hadn’t been in the water for over 30 years, and “leaked like a sieve” doesn’t begin to describe it. It was too far gone for caulking to help so I tried a new thing called “Fiberglass.” That did the trick and I sailed her around for years. 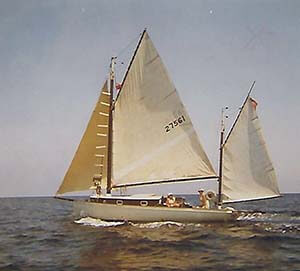 Fast forward to the 1960s. I was living in Southern California and bought my first big boat, a gaff-rigged yawl built in 1916 by George Lawley in Dorchester, MA. I named her “Orion” after the constellation that had followed me every winter, no matter where I was in the world. She was a beauty, 32 feet on the waterline, cedar planked over sawn oak frames, and at some point in her life her frames had been sistered with copper fastened, steam bent oak ribs.

I had a bunch of sailing buddies who owned various boats including a Cal 33, Islander 34, 40-foot 1935 Friendship Sloop, and a classic 30-foot 1913 Angleman designed gaff-rigged cutter. We all crewed together on each other’s boats each weekend, and raced whichever boat had the best chance of winning. We raced around the buoys in L.A. Harbor (also around the big tankers, freighters and container ships anchored there), as well as long-distance races such as around Catalina Island, 26 miles offshore and the Newport to Ensenada Mexico Race, 125 miles away. We were almost always first across the start, and since they used the PHRF Handicap, a lot of the time first to finish. The party and beer afterward were another big draw.

My next-door neighbor and best friend Keith was a fireman and he owned the gaff cutter in partnership with two other firemen. They worked 24 hours on and 48 off so they had plenty of time to work on the boat and also pooled all their cash to put into her, so they had a full set of Dacron sails complete with spinnaker! She was named “Tiare” after the Polynesian sea goddess.

The only time he and I competed head-to-head was in the annual Pacific Yacht and Balloon Club’s “Ancient Mariner Race” from Catalina Island to L.A. Harbor. Eligible boats had to be either over 50 years old or gaff rigged, and we qualified on both counts.

Although Keith had the new suit of sails and the perfectly sanded hull, I had a couple of feet on the waterline. Also, I had been lucky enough to meet an old shipwright who had done his apprenticeship in the Lawley Yard in the 1930s. He sailed with me quite often and taught me all the tricks of getting the most speed out of a gaff rigged boat.

Now there’s an interesting thing about the Catalina channel: Although the winds are fairly shifty in the morning, every day at precisely one o’clock in the afternoon, the San Pedro wind comes up out of the Southwest and it blows a constant 12 to 15 knots.  You can set your watch by it. Keith and I didn’t discuss strategies before the race, but I knew he loved to use his spinnaker. Orion, being a yawl, was fastest on a broad reach, so I planned to position myself to be at the eastern end of the island when the wind came up in order to take full advantage of it. Tiare did pretty well going to windward so he beat up to the western end, planning to pop his chute and come charging down on the fleet. As for the rest of the boats, most of these guys raced once or twice a year, and though far from clueless, they were not as competitive nor versed in the local knowledge as the two of us.

When the starting gun went off and we both took off in opposite directions and quickly lost sight of each other. For four or five hours we didn’t see many competitors until we neared L.A. Harbor. I was tearing along at hull speed on a broad reach, and I could see Keith’s spinnaker bearing down on me getting closer and closer as we approached the finish line. The only difference was I was on starboard, and he was on port! As he got closer, I yelled out “Starboard” and he had to bear off, losing his momentum. I crossed the finish line a boat length ahead of him after a 26-mile race! He corrected out ahead of me due to our handicaps, but we both won first in our classes.

A bunch of my buddies said, “Oh, that was just a fluke, you’ll never do that again,” so just to preclude that type of conversation, I went back the next year and did it again! Then they asked: “Did you drive the hell out of that poor old boat again?” and I told them “No, only enough to win!”

Well, I’ve enjoyed sailing here on Lake Lanier for the past 30 years. As with most things, the sport progresses and for the older boats, technology passes you by. A good example is the progression of the Americas Cup racers. From the 1950s through the 1980s they sailed 12 Meters, which weren’t that much different from the boats we sailed at the time except for scale. One could identify with the helmsmen, winch grinders, sail trimmers and tacticians. In recent years it has turned into a sport more akin to NASCAR, and rather than identifying with it I’m scared by it. No longer do you depend on the natural motion of the wind and water to win races, but upon the strength of the crew grinding or pedaling away at hydraulic pumps, and scrambling across the boat at each tack to start pumping again. I can easily imagine a time when they all employ sumo wrestlers to pump the hydraulics, and then roll across the deck at every tack!

For years offshore in N.J. and here on the lake I sailed and raced a Tartan 36 and at times I even won some of those races. However, boat design and construction materials have advanced so much in recent years that my keel weighed more than an entire modern boat of similar size. Even with different fleets and PHRF ratings trying to level the playing field it just doesn’t seem to be as much fun as it used to.

I believe we have enough “older” boats on the lake to create an “Ancient Mariner Class” limited to boats of a certain age or rig, say over 25 years old and/or gaff rigged. If that is not feasible, just have an Ancient Mariner Race once or twice a year in conjunction with one of the other regular scheduled races.

A Thanksgiving to remember