Cruising the Caribbean and the Panama Canal

Over the years I’ve done a lot of cruising in the Caribbean, mostly behind the wheel of a sailboat. This has its pluses and minuses. On the plus side, you have the freedom to go anywhere you please with just the natural motion of the wind and water taking you there. On the minus side, you have the responsibility of the boat and everyone on board. I take this very seriously and confidentially I’m a bit “up tight” until we’re safely moored each night. Then I can begin to relax.

In recent years my wife and I have begun taking cruises on small ships and riverboats throughout Europe and the Caribbean and it’s a totally different world! I just write a check and let someone else worry about responsibility. Then sit back with a drink in my hand and my blood pressure goes down 30 points. 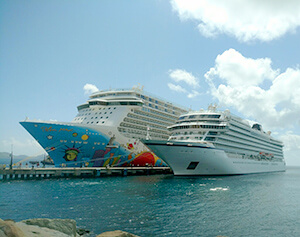 Let me expound on the difference between “small ship” and the normal conception of cruise ships.  The small ship carries about 500 passengers and has the ability to get into ports that could not accommodate the larger vessels, some of which carry upwards of 6,000 passengers.

We had the misfortune of being “Shanghaied” aboard one of these megaships awhile back and “never again!” It was like being in the Navy, except not as well organized. We should have been suspicious when we found out how cheap it was, then when you get aboard, they nickel-dime you to death. Although there were plenty of things to do, most of them involved an extra charge, and from the tiny “rabbit warren” of a cabin we had deep down in the bowels of the ship, it seemed that to get anywhere you had to go through the casino.

Juxtapose that with a small ship (We just returned from taking the Viking Star on a 14-day cruise to the Panama Canal.). With only 500 passengers and 400 crew, from the time we got on board everyone from the cabin stewards to the waiters and waitresses in the restaurants called you by name. We had all the amenities of the larger ships except for the casino and with none of the crowds.

As far as Covid was concerned, everyone had to be fully vaxed and tested before boarding. Then daily saliva tests, numerous hand washings, temp taken before each meal, masks in public aboard and ashore, social distancing and nobody got sick.

The cruise was up to the usual Viking standards, i.e., fantastic! Shipboard routine included incredible food taken in several restaurants, swimming and sunbathing in the “infinity” pool, lectures by guest speakers, nightly entertainment and even some alcohol consumption.

Ashore we visited Mayan ruins in Yucatan, ancient pyramids in Belize, took raft rides to view wildlife in Honduras and toured Panama City where we saw historic sites including the cathedral with a solid gold altar which the locals had painted black when the famous pirate, Henry Morgan raided the city, so he passed it by! 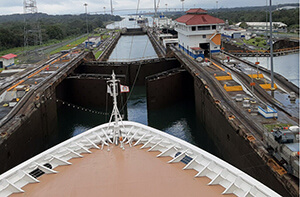 Traveling through the Panama Canal locks.

The main reason we chose this trip was the canal itself. I have been enthralled by the Panama Canal ever since I read about it in the sixth grade. The French attempted to build it in the 1870s after their success in constructing the Suez Canal. They failed miserably due to several things. The Suez Canal is at sea level in a desert, so all they had to do was move a bunch of sand. In Panama they had to cut through impenetrable jungle and go through a mountain range. This was far beyond the capability or even the technology of the time. On top of that they had to conquer malaria and yellow fever, two diseases much more fatal than Covid, back when no one even suspected the cause of them. The French finally gave up and no one thought much about it until the Spanish-American war of 1898. After Admiral Dewey defeated the Spanish fleet in the Philippines, he had to sail around Cape Horn at the southern tip of South America to get to Cuba and join the fighting. If there had been a canal in Panama, he would have saved several weeks and 11,000 miles.

This awoke interest in a canal, so the US Army Corps of Engineers took over the project from the French. They decided to build a series of locks to raise the ships 85 feet above sea level over the mountains. The concept of locks raising and lowering water levels has been around since Leonardo Da Vinci proposed it several hundred years ago. But it had never been attempted on such a large scale. On top of that, the US Army medical corps had to figure out what was causing malaria and yellow fever which was killing hundreds of workers a day.

Add to that the technology of 100 years ago. Looking at old movies and newsreels of the equipment they used is amazing. The fact that a man could simply shovel coal into a firebox and these gigantic machines would move billions of cubic yards of earth, then transport it out of the way, then go on to move billions more boggles the mind.

Then the locks themselves had to be designed and built. They are the size of the Empire State Building laying on its side. As a percentage of our GNP at the time, it was equivalent to putting a man on the moon!

Back in the sixth grade I never dreamed I’d have the opportunity to see these locks in operation but actually go through them.

Looking back on the trip, it was everything I expected and more. The only downside of the whole experience was the food. I’m convinced that if the cruise had lasted one more day, I’d have had to go ashore either in my bathrobe or my bathing suit because they were the only things that fit!

Low tech gets the job done when it comes to energy

Reminiscing on a different kind of Caribbean getaway

Be careful where you buy your fuel