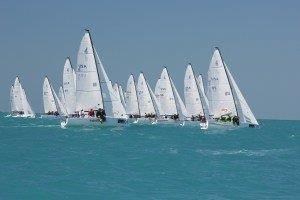 A scene from the 2013 St. Petersburg NOOD Regatta

A long time ago, I heard an interview with Ted Turner. One of the things that stuck with me was his response to the question: “What makes you such a good sailor.” His answer was “I learned to sail on Lake Lanier, and if you can sail there, you can sail anywhere.” At the time I was living up north and had no idea where that lake was. Then I moved down here and quickly I learned what he was talking about! Up there, in the open ocean, I was considered a “kick ass” racer, with a wall full of trophies. Down here I found myself following the rest of the fleet around the course! Knowing that local knowledge was everything, I picked out the most consistent winner and followed him, learning about the wind shifts and shadows and the famous “sucker puffs,” that fool you into thinking that a consistent wind was filling in, but then just disappear! (Now the lake is surrounded by the acres of asphalt: the big mall down in Buford, the one over in Cumming and the one up in Gainesville.) On a bright sunny day with no cloud cover, the asphalt in those parking lots heats up and the hot air rises. The cooler air on the water rushes in to take its place, and you can have winds blowing in three directions, all around the lake and “Death Valley” out in the middle with not a breath of air! The lake is also surrounded by tall trees, and their “wind shadow” blocks the wind for about seven times their height. It took me a couple of years to re-learn how to sail!

Conversely, on the large bays and open ocean, the winds are usually consistent but the closer you get to shore the more you must take the currents into consideration. The night before a race when everyone else is partying at the yacht club, I’m at home studying the tide and current charts. I do my partying after the race.

For any port on the East Coast there are tide and current charts going back over a hundred years. If you have a 0.6 knot current on your nose, vs a 1.2 knot current on your stern a half mile away it makes quite a difference! A lot of lake sailors don’t take this into consideration when sailing on salt water.

Now the NOOD (National Offshore One Design) Race down in St Petersburg is held in February every year and it attracts racers from as far away as Lake Michigan, some of them towing 36-foot Tartan Tens all the way down. (Now I’ve seen Lake Michigan in February and if I sailed there, I’d tow my boat 2,000 miles just to go sailing in the sunshine too!) Add to that the fact that St Pete is one of the more POSH clubs on the East Coast and they throw great parties for the skippers meeting, Saturday night after racing, as well as Sunday for the trophy presentation.

Each year my wife and I volunteer for the Race Committee with our old Olympic crew from 1996 in Savannah. Some years there are up to 10 to 12 different classes competing, so you can imagine the organizational skills it takes to have that many orderly starts. One year I was on a mark boat at the leeward end of the start line. I remember a J-24 start when we had very light airs and it was slack water just before the tide (and current) changed. A boat from LLSC, which was a consistent winner when sailing up here on the lake, crossed the start line three times, then was pushed back by the current each time, which was getting stronger and stronger by the minute! They finally got across about the time the rest of the fleet was halfway to the windward mark! It was amusing sitting on the sidelines as the crew scrambled around trying to get the sails set perfectly, then as they would finally inch across the line, watching themselves going backward each time. Meanwhile the race committee would enter their sail number as having started, only to have to scratch it out each time and enter it again!

That night, the party happened to coincide with the first race of the America’s Cup in New Zealand. This was before big flat screen TVs were available to the general public, and one of the major electronics manufacturers had completely covered one wall of the meeting room with flat screens all wired together so that they showed a picture as if it was one giant movie screen.

There were about 100 sailors crowded into a room designed for 50, and as the rum flowed freely the camaraderie and tension were high. Now this was the first year that New Zealand was defending the cup on their home territory. The New Zealand government in its infinite stupidity (thank goodness we don’t get all the government we pay for!) decreed that their boat and all its equipment had to be manufactured in New Zealand. Meanwhile, all the challengers collected the best of everything from all over the world while the Kiwis had to make do with their own! Needless to say, as soon as they got across the start line things began to go wrong. First the end broke off the carbon fiber boom and as they scrambled to repair that, water began to pour over the leeward rail into the cockpit! As they continued to sail, more and more little things continued to go wrong such as fittings pulling loose from the mast or deck, each one costing them more speed. Every time something went wrong, the entire crowd would moan in unison so the whole room reverberated with OOHs! and UGHs! As I remember, they crossed the finish line with one crew member still bailing out the cockpit with a plastic trash can!

It was the perfect distraction to top off a hard day of racing with very little wind and the strong currents of Tampa Bay!

The time war came to our Southern coast

Sticking to your specialty

Autumn – when our coast is clear