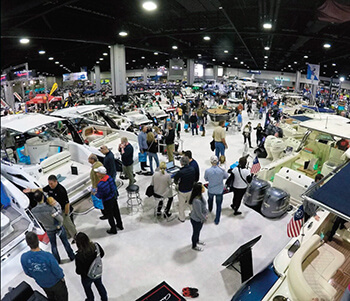 A scene from a previous Atlanta Boat Show. The show won’t be taking place this January.

The January Atlanta Boat Show, traditionally held at the Georgia World Congress Center in mid-January, has been canceled for 2022, with the possibility of some type of boat shows at Lake Lanier in the spring. The Atlanta Boat Show is one of five that have been canceled for 2022, according to a news release from the National Marine Trade Association, that produces many of the boat shows in the United States.

The issue, according to the news release, is supply chain. With the strong interest in boating since the pandemic, more people than ever are purchasing boats. The demand, plus the issues of manufacturers’ inability to get parts, employees and transportation, has caused longer than usual deliveries across the country.

“Unprecedented market conditions are forcing event producers around the world to be more nimble than ever, all while providing an opportunity to connect with attendees in new, more relevant ways and NMMA is no exception,” said Frank Hugelmeyer, NMMA president. “These announcements come at a time when we’re experiencing extraordinary levels of consumer interest in boating and our shows amid product scarcity.”

In addition, four other major boat shows have been canceled for 2022: Baltimore, Chicago, Nashville and St. Louis. Most of them had been scheduled for the first quarter of 2022.

The Atlanta Boat Show’s Facebook page has been updated to reflect the cancelation, citing “current market conditions and needs in Atlanta.”

As of November 22, the NMMA.org website still showed active dates for the Atlanta Boat Show. However, the site (www.atlantaboatshow.com) reported that the next show would be in January 2023 but no specific dates were listed.

NMMA will be producing events in nine cities next year, including St. Petersburg, New York, Miami and Atlantic City.