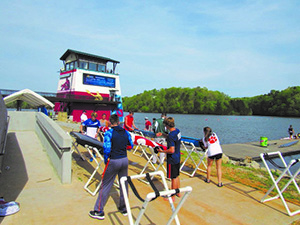 Improvements are afoot at Lake Lanier Olympic Park in the wake of the venue’s 25th anniversary this summer. A sunshade for the upper grandstand plaza, a one-mile walking trail, and two new courtesy docks are part of an improvement package proposed by the Lake Lanier Olympic Park Foundation. An Aug. 7 anniversary celebration is in the works to raise money for capital projects at the site chosen for the 2026 NCAA Women’s Rowing Championships.

The anniversary festivities, including a morning 5K torch run and evening gala with a live band, will “be a lot of fun and bring back a lot of memories from 1996,” said Robyn Lynch, LLOP executive director.

The venue on the Chattahoochee River arm of Lake Lanier achieved international prestige as the 1996 Olympic site of rowing and canoe/kayak competition. It has outlived most of Georgia’s 1996 Olympic sites, built primarily as temporary facilities for hosting the Olympics.

The Olympic torch has been kept aflame at LLOP by canoe/kayak and rowing clubs and the legacy organization that labored to bring the Olympics to Gainesville. The LLOP Foundation, formerly Gainesville-Hall ’96, reorganized in 2013 and hired its first venue manager the next year. The foundation generated a revival of the facility that some described as a fading gem needing polish. Since then, LLOP has remained a favorite for canoe/kayak and rowing competitions and has grown its profile in the local community.

The city of Gainesville took over the 35.5-acre park in 2019. It allocates LLOP funding through Gainesville’s hotel/motel tax.

The LLOP Foundation is raising funds for the three improvements to enhance accessibility and comfort for park users, according to Lynch, who also serves as Gainesville tourism director. All are expected to help increase attendance and rentals at the park that has expanded its culture in recent years to include food truck dinners, concerts, movies, weddings, wakeboarding competitions, triathlons, boat shows, traditional Gainesville celebrations, and corporate events.

A sunshade with attaching side panels is proposed to cover the upper plaza, shielding it from inhospitable weather. It could enable the plaza to offer “more events throughout the year,” Lynch said.

The walking trail would connect both sides of the park, which is split by Clarks Bridge Road. A section would extend from the boathouse side under Clarks Bridge Road on the pedestrian tunnel to the grandstand side and continue with a pathway along the lake, eventually passing under the bridge to loop back to the boathouse side. Lynch said research is ongoing for the type of material to surface the trail. The area is prone to occasional flooding.

The LLOP Foundation is also seeking corporate donations and looking into selling commemorative bricks to finance the improvements, Lynch said.

The venue has undergone two major phases of renovations in the past quarter-century, the first being the construction of the grandstands and plaza prior to an international canoe/kayak competition in 2003. The stone and concrete permanent structure replaced temporary seating installed across the channel for the Olympics.

Major renovations to the Olympic tower and grandstand area were completed before the 2016 Pan American Olympic canoe/kayak qualifier.

The legacy organization that spearheaded LLOP’s revival introduced a master plan several years ago that includes a picnic pavilion, new restrooms and boathouse renovations. Renderings of these proposals appear on the LLOP website. The boathouse built for the 1996 Games has flooded several times and has suffered various maintenance issues through the years. The three new capital improvements Lynch detailed do not appear in the master plan.

Lynch indicated that the current proposals for park improvements are not linked to the 2026 NCAA women’s rowing championship and were not part of the bid package. NCAA and Lynch declined to provide details about the winning bid submitted by the city, Lake Lanier Rowing Club, LLOP foundation, and NCAA member-school, University of North Georgia.

Last October NCAA named LLOP to host the Div. I, II and II championships, expected to bring 40 teams and generate $3 million in tourism revenue. Lynch expects the revenue to flow not just on race days, but also from crews training and competing on the lake prior to the championships. It will be the second NCAA Women’s Division Championships to come to Lanier. The first NCAA appearance was in 1998.