A visit to Mobile and historic Battle House

Though Andrew Jackson became president of the United States, he was more famous as a strategically intelligent general and native American fighter. Therefore, it is no surprise that prior to the War of 1812 against the British, he established his headquarters on land that is now the Battle House Renaissance Mobile Hotel & Spa in downtown Mobile, Ala. 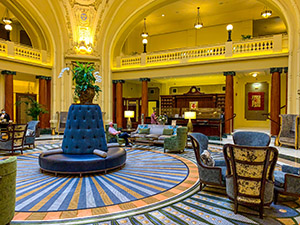 Historic Battle House lobby is both beautiful and historic

The original Battle House was built in 1852, and according to historian Stanley Turkel, was visited by famous people like Henry Clay, Jefferson Davis, Millard Fillmore, Winfield Scott and Stephen A. Douglas. After fire destroyed the original structure in 1905, the hotel was rebuilt and opened again in 1908. It was visited by President Woodrow Wilson in 1913 and operated as a Sheraton Hotel until closing in 1974. The Battle House has been an important part of American history for more than 150 years.

The modern Battle House Hotel was restored and opened again in 2007 along with an adjoining skyscraper, the RSA Battle House Tower. Today, the immensity of the lobby alone and the gorgeous artwork below a domed skylight demands your attention. The ceiling and walls are finished with elaborate plasterwork and are painted with portraits of Louis XIV of France, George III of England, Ferdinand V of Spain and George Washington.

Connected to the lobby is the Trellis Room which is Mobile’s only Four-Diamond restaurant specializing in Northern Italian cuisine and features a full-view kitchen so patrons can watch chefs prepare their meals. From personal experience dining in the Mobile area, I can assure visitors this restaurant has the best food and service in coastal Alabama!

Using the immaculate and historical hotel as a “base of operations,” you can easily walk or drive to numerous interesting and picturesque venues. Mobile was founded by the French in 1702 and still has many of its early buildings dating back to the nineteenth century. An entire day could be spent walking in the downtown area with its tree-lined parks, beautiful French architecture, plentiful art, eclectic restaurants, museums and ever-changing bar scene. 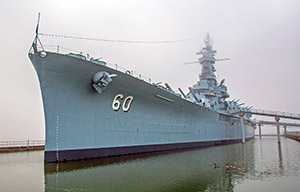 The USS Alabama in the Morning

Not far from the downtown streets is the USS Alabama Battleship Memorial Park,  which is a “must-see” during any visit to Mobile. This stately battleship was built in 1942, and after World War II. It was “mothballed” in 1947 in Washington State. However, with $100,000 raised from change collected by Alabama school children and another $1 million in corporate funds, the ship was saved from the scrapyard and was opened to the public in January 1965. A major part of the park is the aircraft museum that displays airplanes spanning many decades in all branches of the nation’s military. Korean and Vietnam War memorials are also in the park.

No trip to this area of coastal Alabama would be complete without spending a few hours taking in the exquisite floral scenery at Bellingrath Gardens. Only 30 minutes south of Mobile, this 65-acre property was the dream of Walter and Bessie Bellingrath, who built the expansive flowering gardens in the early 1900s. Seasonal flora in the intricately planned thematic gardens, an Asian garden, rose garden, great lawn and conservatory are unforgettable!

With spectacular old and new architecture, colorful gardens, numerous historical sites and an always friendly and festive atmosphere, Mobile rocks! It is an international place where history and modern desires combine with urban amenities and country hospitality. Located just off the Gulf of Mexico and at the head of Mobile Bay, this is one old Southern city that has become a prime destination!

Check out video for more great photos of Bill’s trip to Mobile, AL

Carters Lake is the deepest lake in the Georgia mountains

A scenic pathway to the mountains is unforgettable