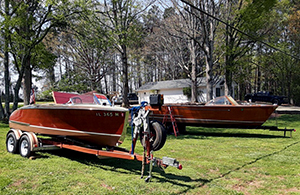 I have always been fascinated by wooden boats, no matter whether they are sail, power or rowboats. My first boat was an eight-foot wooden dinghy that floated up on the beach after a hurricane. After unsuccessfully trying to find the owner, my father allowed m

e to keep it and I rowed for miles exploring up and down the river and all the creeks around. When I was in high school, I had an old 16-foot Barnegat Sneakbox, a 1930s era gaff-rigged sailboat. This type of boat was designed way back in the mid-19th century for duck hunting among the marshy areas of Barnegat Bay, NJ. It had a removable mast and a deck that curved extremely low down to the water so you could disguise it with marsh grass and “sneak up” on the ducks. A sort of moveable duck blind. It was perfect for knocking about the river and I spent many happy hours doing just that.

At that time, my two younger brothers hung around with a couple of “rich” kids across the river who owned a brand-new runabout. That was my first encounter with a Chris-Craft. It was all varnished mahogany and chrome and looked like it was doing 60 miles an hour even when sitting at the dock.

Whenever I was out sailing, these two guys and my brothers took great pleasure in zooming by as close as possible making a large wake and dousing me with spray. This came to an end one Sunday afternoon when they ran out of gas and I got a chance to tow them home. The memory is still delicious, with their entire family sitting out on the well-manicured lawn watching as I sailed up to the dock with the runabout in tow. I can almost still hear the tongue lashing their father gave them in front of everyone.

Chris-Craft has been making boats for well over 100 years, starting out in the 1870s. They began full production in the 1920s. Along came the Great Depression and they survived by marketing their boats like automobiles at a time when recreational boats were considered only for the rich. They came up with some unique innovations still in use today. They coined the phrase “cabin-cruiser” among others. They also built a gasoline engine designed for marine use. Before then most marine engines were converted from aircraft or automobile engines. At one time they built houseboats and even sailboats. During World War II they built landing craft that took part in the Normandy Invasion.

As boat building technology advanced so did they, building steel-hulled and fiberglass yachts, however, I am still enthralled by the old mahogany runabouts. When you pull into a marina in the newest state-of-the-art ski boat or bass boat, people may say “nice boat.” Pull into that same marina in a varnished mahogany runabout from the 1950s and you draw a crowd of admirers.

One of the things that I love about wood is that a wooden plank will take a fair compound curve, so it naturally slips through the water efficiently. Without going into wave equations, vector analysis and Reynolds numbers, let me say that if a boat looks sleek it will probably move through the water with minimum effort. It is rare that an “ugly duckling” will have an efficient hull. Anyone who spends any time on the lake will admire how the older hulls glide gracefully along causing a minimum of ripple in the water. Opposed to that is the modern fiberglass cabin cruiser that looks like the front 30 feet of a 50-foot boat with the bow pointed toward the sky and the stern sunk down leaving a four-foot wake and dragging half the lake behind it, meanwhile burning 60 gallons of gas an hour.

What brings all this to mind is that every day as I drive down Gaines Ferry Road, past the cherry and apple trees in bloom, I go by my neighbor Jim Kerry’s house. Out on his front lawn are usually two or three vintage runabouts. He does museum-quality restorations on old wooden boats. Occasionally, I stop to admire them. Not only are the woodwork and chrome perfect, but the instruments, upholstery and controls are all to original specifications. Open the hatch to the engine compartment and there is a perfectly restored six-cylinder flathead painted Chris-Craft blue. The only thing not original about it is that the electrical system has been upgraded from six to 12 volts and the generator has been replaced by an alternator. I understand that at any one time he is working on a couple of these boats in his shop.

Driving past these beauties each day, as nice as it is to admire them on dry land, I cannot wait for the warmer weather to see them out on the lake.