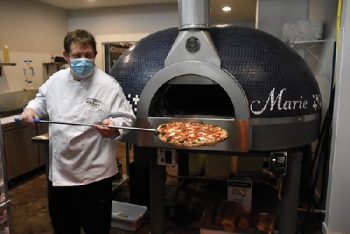 Nick St. Clair displays a pie fresh from the custom made oven at newly opened Peyton’s Pies in Flowery Branch

“This has been a dream of ours for several years,” said St. Clair. “The plan, even back then, was to open Peyton’s Pie Company, named for our oldest son, in downtown Flowery Branch someday.”

St. Clair perfected his crust recipe by experimenting with various types of specially milled flour from Italy. It’s hand-kneaded and allowed to rest for 36 hours before it’s ready to bake.

“Pies are topped with fresh house-made ingredients and our own sauce recipe,” St. Clair said. “We’ve created about a half-dozen combinations, or guests can build their own pizzas.”

The specially designed wood-fired oven was imported from Italy. It arrived in pieces and was custom built in the restaurant. It features an internal turn-table to ensure that the crust cooks evenly.

The couple has partnered with Roland Stanley, owner of Cork It in Gainesville.

The St. Clairs had “Marie” inscribed in tile on the side of the oven. “The people who designed the oven in Italy have a tradition of asking owners to name their ovens,” St. Clair said. “Karen Ching was a strong supporter of ours, and although she passed away earlier this year, in a way Peyton’s is a tribute to her and all she did for Flowery Branch. Marie was her middle name.”