An explanation of India Pale Ales

It’s mid-April, the air is green with pollen and everything is in bloom. I’m dreaming of refreshing, piney IPAs, yet the evenings are still a little cool for my dreams to come true. So while I drink a Founders Curmudgeon’s Better Half old ale, lets talk IPAs and dream of summer on the lake or grilling in the backyard with friends. To me, there’s nothing more refreshing than an IPA but I’m getting ahead of myself.

Your monthly history lesson:  IPAs or India Pale Ales were developed in the 1800s to successfully endure long sea voyages and quench the thirst of those in far off countries, purportedly British troops, but non-military buyers lined up as well. A large amount was shipped to India, via hogshead casks, hence the export version of pale ale was named India Pale Ale.  IPAs were more heavily hopped than other beers and this helped keep their taste well preserved for the journey. The age of refrigeration was ushered in and IPAs lost favor. Fast forward to 1976, the craft beer age was starting and IPAs regained favor. These days they are quite the sensation with the many different styles and sub categories.

Beer is measured by several standards with one being IBU (International Bitterness Units). It is a self-explanatory measurement, ostensibly to let people know how bitter a beer may be. However it shouldn’t be used by itself as other factors may mask the perceived bitterness. A high IBU may have a maltier profile that would mask bitterness. My advice: Ask for a taste if you think a high IBU may be out of your range.

Other measures of beer are the original and final gravity measurements. Typically when we refer to high gravity beers we are referring to the measurements taken during the brewing process. Original gravity (OG) measurements calculate the fermentable and unfermentable substances in the wort before the fermentation process. This simple test gives us the potential alcohol level when the process is finished.  When we are ready to bottle, we test it again to determine Final Gravity (FG) to see how our theory proved out, it’s usually pretty accurate. IPAs are generally considered high gravity beers. They can vary in ABV from 5%-20%-plus when you look at session beers versus a Dogfish Head 120 minute IPA (which could understandably be confused with a barley wine). You won’t find this beer in Georgia due to its high alcohol content but if you ever have a chance to try it, split it with a good friend.

There are many different IPAs and now we also have sub-IPAs.  They run the gamut from irresponsibly hopped to general public, with an easy drinking hop level.  At least that’s how I describe IPAs to my husband. He prefers a more thoughtful beer drinking experience and I am a self-described hophead. I love it when a brewery pushes the limit on their hops, but neither of us wants to be hit in the head with a grapefruit when sipping.

Arguably there are 9 different IPA styles and then you have sub-styles and strength styles. I say arguably as categorizing them will most certainly cause arguments.

Then you have variations on how a beer is hopped:

Wet, or fresh, hopped beers have fresh, non kiln-dried hops added to the wort for a more intense taste.

And remember: IPA Day is the first Thursday in August! 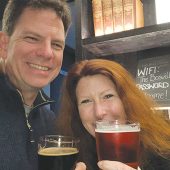 Husband and wife team Michael and Sali Duling, focus on all aspects of the third most consumed beverage in the world (behind water and tea). 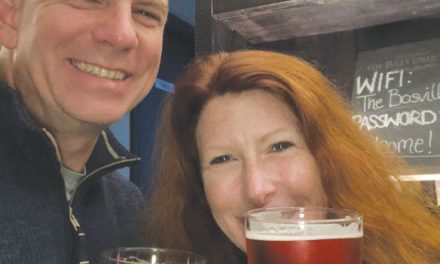