It is Saint Patrick’s Day! Give or take a few days. Time to don some green, gather friends and raise a pint of Guinness! Ah the dark stuff, that many only drink one time a year. But why? It’s dark, it’s too thick, it has too much alcohol or too many calories –  those are the common reasons.  Why then, are over 10 million glasses of Guinness served daily around the world?

Guinness is generally misunderstood, as are most stouts when someone is looking for a “beer.”  The Guinness that we find today actually came to be in 1959 and is called Guinness Draught. It is not a lager, which is what Bud Light is for. It is not a pilsner. Think Miller Light. Guinness Draught is a stout, a beer family that utilizes roasted malts and other grains to get its dark color and bolder flavor profile.

It does not cause extra calories or alcohol levels as some assume. Guinness actually has the same alcohol by volume (ABV) as Bud Light, 4.2%. As for calories, Guinness comes in at 128, Bud Light at 110 and Miller light at 96, skim milk at 126. Yes, you read that correctly, Guinness has two more calories than the same amount of skim milk. So put aside those weight gain concerns and enjoy that glass.

Now that those myths are gone, let us pour a Guinness! Pouring a draft Guinness the proper way is an art, but today we are going to concentrate on the can. When you first open that can you will hear a hiss and some unique gurgling, that is the nitrogen widget that Guinness pioneered in the 1950s. “The world famous Guinness widget uses an ingenious nitrogen filled capsule that surges with bubbles when the ring pull is opened – replicating the Draught experience in a can,” the company says on its website. The nitrogen gives Guinness that creamy head, the signature and rich taste without the calories. As you fill your glass from the can, you will see the cascading nitrogen bubbles that are creating that distinct foamy head. Guinness only puts the widget in the can these days; the bottle does not have it. Guinness has changed the bottle with the idea of being able to drink it straight from the bottle with no glass needed.

Arthur Guinness started brewing beer at Saint James Gate in 1759, by signing a 9,000-year lease! You read that right, 9,000 years! Now that is some confidence. Arthur Guinness knew he could make an extraordinary beer, so in 1799 he stopped brewing ales and focused on brewing porter, a black beer from London. Porters and stouts are two styles that are intermingled quite often. Guinness started as a porter but is now called a stout, or a “stout porte.”

Guinness has a distinctively different flavor, so do not expect a common beer taste, this is extraordinary.  On the nose, Guinness has a sweetness with the malt flavors breaking through just a touch. As for the taste? Guinness has many flavors going on; stouts have a more complex taste profile than most beer. Guinness is a good balance between the sweet malt and the bitter hops to form a pleasant taste. Did you catch the flavor notes of coffee and chocolate? How about the roasted grains giving it a bit of a toasty taste? The creamy texture will throw you a bit, if you are not expecting it, but it is all part of the charm of a wee pint of the dark stuff!

For an even more unique experience, try it at room temperature! It is a different beer. This is why many people serve it at temperatures from 45-65. Caution! When you open a can at room temperature have a glass ready, the nitrogen releases with a vengeance and the beer will be coming out whether you want it to or not. You will find that stouts generally are at their best in these temperatures. The flavors are smoother and very easy drinking. Ice-cold Guinness can be a little bit harsh when it delivers its flavors. Kind of like a  bull in a china shop. At room temperature, the flavors introduce themselves, as if you are on a first date. The slight bitterness from the hops is still there at the finish, but a good bit tamer. At room temperature, that bitterness just begs you for another sip, and then another after that. The bitterness is no more than a beer that you may be used to, but it will be a little different with the roasted flavors mixed in.

You may have guessed that we are fans of Guinness. When we first met at a local Irish pub. I fell in love as Sali turned away from the bar with a glass of Guinness in her hand, the bartender brought mine a moment later. Four years later, we were engaged in Arthur’s private bar at the Guinness Brewery at St James’s Gate in Dublin. Both of us having Irish heritage does not hurt!

So this St Patrick’s Day, have a Guinness, or two. Close your eyes and focus on the flavors, you may just find more in that pint than you had previously realized.

Husband and wife team Michael and Sali Duling, focus on all aspects of the third most consumed beverage in the world (behind water and tea). 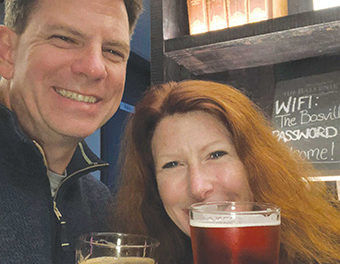 An explanation of India Pale Ales