Carroll Daniel/New South has been chosen as the general contractor for the Lanier Islands Conference Center at the October meeting of the Lake Lanier Islands Development Authority Board.

“Eight firms responded to the RFQ/RFP; five firms made the shortlist firms, four firms made a presentation to the Conference Center subcommittee,” said Bill Donohue, executive director of LLIDA. “The board approved the selection of the highest ranked firm, Carroll Daniel Construction/New South and authorized the next step of developing the contract language on the project.”

The contracting process will be overseen by the Georgia State Financing and Investment Commission. The commission’s Chief of Staff Gerald Pilgrim and Deputy Executive Director Gifton Passley were introduced to the board at the meeting.

The board approved a cost-sharing partnership for the Impact Project Management Inc. invoice – LLIDA, will provide 45 percent of the costs; Lake Lanier Islands Management will fund 55 percent.

The project, which includes the 115,000-square-foot conference center and a separate 300-room hotel to be built on the site of the former PineIsle Hotel, has been in the works for five years. The state has invested $62 million in the public-private partnership with Lake Lanier Islands Management, which operates Lanier Islands.

In May, LLIM contracted with Benchmark Resorts and Hotels to manage Legacy Lodge. The hospitality firm operates projects in nearly two dozen states.

Grier Todd, COO of Lake Lanier Islands Management, reported that the resort had strong business for the past two months.

“We’ve seen a shift in our business sectors, with our meeting and group travel coming back to 2019 levels and our leisure numbers slowing a bit,” he said. “We’re looking forward to Christmas with the packages we are offering.”

“We’re very excited about adding a whole new dimension of entertainment space for our guests in the coming months,” Virgil Williams, CEO of Lake Lanier Islands Management said. “And we’re especially pleased about how the new conference center is coming together.”

Bucky Perry, vice president of operations at Margaritaville, reported that the new dry-stack boat storage is approximately 45 percent filled with about 100 boats, and boat slip rentals on four docks are 95 percent occupied.

The next LLIDA meeting will take place on Tuesday, December 13. 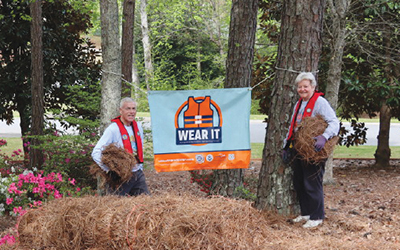