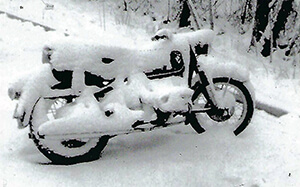 Ten or fifteen years ago I was having lunch with some friends in Alpharetta, and we ordered another pitcher of beer. Our waiter said, “Sorry Sir, but we’re closing the restaurant, it’s snowing outside.”

We looked out and sure enough, real snow was falling! One of us had an app on his phone which told us the traffic on the road outside the restaurant was moving at two miles an hour!

We all scurried for our cars and home. First thing I did was fill up with gas (luckily). It took me 11 hours to make the 40-minute drive from Alpharetta to Flowery Branch! It seems the state, city and county governments had decided to let all their employees and the schools off at the same time and created “terminal” gridlock! I think it was Will Rogers who said, “Thank goodness we don’t get all the government we pay for!”

Now I hate to say, “How we did things up North,” but when snow was predicted, they just bolted the snowplows on the front of the garbage trucks and plowed out the streets instead of picking up the garbage! No big deal!

All the schools had eight “snow days” built into the schedule and if school was canceled, the names of the schools were read off on the local radio stations. Us kids were always up early and glued to the radio hoping our school would be announced.

This was a great time because we all had a chance to go sleigh riding, build snow forts, have snowball fights, and once the games were over, we’d shovel out people’s cars for a couple of bucks apiece.

Now there was a guy a few years ahead of me in school who dropped out at age 16 to make his fortune as a clamdigger. As I remember, he was a real jerk, and was not missed by students or teachers. He quickly found out that clam digging was hard work so through family political connections, he got a job driving the garbage truck.

One of his favorite pastimes on snow days was to pile huge mounds of snow up against the cars that had just been shoveled out, making us shovel them out again in order to get paid. This went on for a while until someone found a railroad tie and came up with a plan: They pried the cover off a manhole, put the railroad tie into it sticking out about a foot, and piled snow all around it. Then they hid behind a wall and waited. As I heard the story, the snowplow hit the railroad tie at about 10 miles an hour and came to a jolting halt! It tore the snowplow half off the truck and bounced the driver around a bit. He managed to limp the truck back to the borough garage dragging the plow and claimed that someone had put something in the middle of the street to deliberately sabotage him! When the police came to investigate, there was no sign of a railroad tie, the manhole was properly closed and covered with snow and the driver couldn’t even show them exactly where it had happened! The police decided he had hit a curb and made up the story about the manhole. (He already had a reputation with the borough employees.) Through his family political connections, he kept his job on the garbage truck, however, he was no longer up-front driving. He was in the back slinging garbage cans and swatting flies!

I think the best snowplow story happened several years later when I was in college. At that time, car insurance for a single guy under 25 was about the same price as tuition, while motorcycle insurance was extremely cheap. I traded in my VW bug which I had purchased while in the Navy for a 1963 BMW motorcycle, which I rode until I was over 25 (I’m still riding it, but that’s another story). I always parked it in the street in front of my house and one night we had a big snowstorm. I got up in the morning and the motorcycle was gone! It seems the snowplow had been along! I got out my shovel and headed down the street to the biggest snow drift, and sure enough, there was the mirror sticking out of the snow! After carefully shoveling it out, I turned on the fuel, primed the carburetors, gave it two kicks and it started right up!

Although it’s nice to see snow every once in a while, as a novelty, I don’t miss it at all!

A Thanksgiving to remember

A man, a plan, and sour grapes