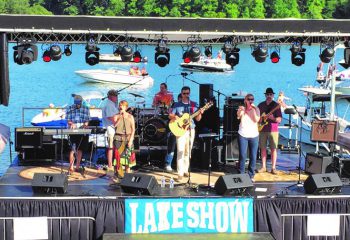 Gates open at 5 p.m. Music starts an hour later. Attendees are expected to come by boat and car. Food trucks and drink vendors will set up on the park plaza. The evening includes a fireworks show.

Mullins burst onto the national music scene in 1998 with his Grammy nominated song, “Lullaby.”  His tune, “Shimmer” from the same album, Soul’s Core, also garnered significant airtime, as has his more recent release, “Beautiful Wreck.” His Lake Lanier show will likely draw from Soul Core Revival, a remake of Mullins’ original album.

Allen Nivens and bandmates have brought classic rock and country tunes to venues around North Georgia for two decades, formerly under the name, Midlife Crisis.

As of mid-May, Lake Show reserve sponsor tables were still available ranging from $500 to $2,500. Reservations include food and drink tickets and various advertising options.

The show is a fund raiser for the non-profit foundation that benefits local charities, including the Good News Clinics, the Boys and Girls Clubs of Lanier, Georgia Mountain Food Bank Fund and Good News at Noon Shelter. The foundation was established in 2002 in memory of Georgia Music Hall of Fame member, John Jarrard. The foundation normally offers multiple events throughout the year.