Wonderment about the outdoors drew a home-bodied Vianca Milian to an early career in natural resources. The Iowa native recently moved to Gainesville where she started work in May as the park naturalist at Don Carter State Park.

After two months exploring Georgia’s only state park on Lake Lanier, Milian still marveled at the lake’s vastness. “I haven’t worked at a park with a lake this size,” she said, pondering her past experience patrolling and maintaining two state parks in Iowa’s prairies. “There’s so much to learn.”

Milian, 22, began interpretive programs for park visitors last month. “I love seeing people come out,” she said. Although the park filled with beachgoers, boaters and campers last summer, it offered no naturalist-led programs. Park Manager Steven Emery said the local respite, like many Georgia parks, did not hire a naturalist last year. He looks forward to seeing Milian bring back educational opportunities. “Hopefully (programming) will bring guests out who would not otherwise come,” he said.

For instance, one of the new naturalist’s first excursions appealed to history buffs. “The history hike seems very popular, with people interacting,” she said. In the short trek, Milian reveals the park’s transition from a Chattahoochee River outpost with at least three homesites to its development and opening as Georgia’s newest state park in summer 2013. She even hints about an old gravesite on park property.

Other programs focus on wildlife, such as owls. Milian leads participants to dissect owl pellets to discover what the nocturnal raptors have been eating. The activity brings out numerous fun facts about the big-eyed park residents.

Additionally, Milian enjoys hosting Nature Jeopardy, Scavenger Hunts, and Ecology Games, all aimed toward educating visitors about the park’s natural environment. Plus, she guides hikers on park trails, where she has helped install new markers identifying native plants and trees.  “There seem to be a lot of opportunities to do a lot of different things,” she said.

Milian said she likes meeting people in her “Roving Ranger” excursions to the beach and campgrounds on Friday afternoons. She noted that although her former home in Iowa contrasts deeply with Georgia’s woodlands (“There are a lot more trees here!”), the community is similar. “People who come out to state parks are excited about being here,” she said.

Milian indicated she is sad she will not be leading some of the park’s most popular outings: paddle trips. She said that unfortunately the training course for canoe/kayak guides is not offered this year. However, the park manager may continue the paddling tradition on Dog Creek and to a deserted island near the park.

The naturalist admitted she has much to learn about her new digs, especially when it comes to fishing. “Typically that’s the first thing people bring up,” she said. She added that she welcomes the opportunity to learn about locating, baiting and catching fish on Lanier. “I like being outside all the time, learning about everything around,” she said. She’s game for any fishing tips guests might offer.

Naturalist-led programming back at park 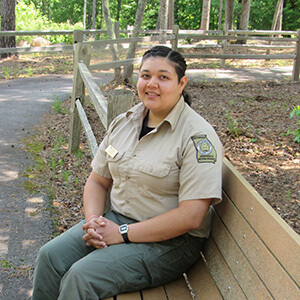 The new naturalist at Don Carter State Park eagerly started making rounds in May, meeting guests spreading towels at the beach, setting up tents and parking RVs. Although she is new to Georgia, the former Iowa resident observed a kindred spirit that lovers of the outdoors seem to share, whether in Iowa’s tall grass prairies or north Georgia’s woodlands. Here’s an introduction to Vianca Milian:

Snakes in the water usually not a danger