For Katie and Taylor Grimsley, when it comes to boats, older is simply better. And they haven’t let the pandemic, wildfires on the West Coast, high winds and hurricane rains prevent them from now owning the oldest boat on Lake Lanier.

“It really seems like every time we buy a boat that’s new to us, the model years are older,” said Katie. “And now, we’ve bought the oldest of them all: a 1928 30-foot Vic Franck Sea Queen, and she’s the most beautiful of them all.”

The couple, who moved to Forsyth County in 1999 from Rock Hill, South Carolina, were drawn to Lake Lanier because of their love of the water and boating. They own Creative Custom Tile in Gainesville just over the Forsyth County line, a business they began in October 1999.

“Taylor and his uncle were avid sailors while he was growing up,” she said. “They raced and spent a great deal of time on the water.”

“We actually bought and sold that Carver twice in one year,” Katie said.

Their next boat, a classic, was a late-1960s Lazy Days Houseboat, purchased in 2016. “It was one of the originals, but we only kept it four years. They sold it in 2020 as part of the downsizing that led to purchasing the Sea Queen.

Their boats continued to get older when they fell for a 1967 Mark Twain runabout, which they owned for five years and used for cruises and dinners with friends.

“We’ve always had a love of older boats because the craftsmanship is so fine,” she said.

As if a 55-year old boat wasn’t old enough, they found a 1958 wooden Century Resort runabout, built of mahogany. “I found this boat in Ohio, because I wanted something a little faster than the Mark Twain,” Taylor said. “It’s a thoroughbred with a 292 Y block Ford Interceptor with dual side-draft carburetors.”

As the couple began looking for a smaller wooden boat to replace the houseboat in early 2020, they discovered the Vic Frank during an internet search. “We fell in love with it because of the style and all the wood, even before we knew how old it was.”

The challenge? Several: It was located in Seattle and the coronavirus outbreak was raging across the country.

“We purchased the boat sight unseen, but from everything we’d read about it, it was love at first sight,” she said.

Katie, who loves to do research, found out the boat’s history. It was one of only six or eight built in Seattle between 1928 and 1938 before the company burned. There were two models, one a 30-footer, the other 36 feet long. Theirs, a 30-foot boat, was built in 1928.

“From what we could find, it was the only 30-foot Sea Queen built in 1928,” she said. The boat was owned by a Seattle man named Bob Irving, who bought it in 1993 and took 18 years to restore it from a rain-filled
hull with rotted wood and no engine to a pristine vessel. It was no easy task to arrange for transportation across the country – finding a surveyor long-distance, locating a transport company, securing transportation permits, lifting the boat out of the water. It all took time that was compounded by the wildfires in the Northwest, travel restrictions due to COVID-19 and various other delays.

“She finally arrived about six weeks after we expected her,” Katie said. “But we immediately launched her and brought her home to Port Royale. We’ve had her out on the lake ever since.”

The plan is to use the boat as much as possible, plus travel to other wooden and classic boat shows to show her off.

They belong to the Lake Lanier Classic Boaters group, which has a Facebook page with photos and other information.

Katie is reflective as she talks about her and Taylor’s “new” old boat. “You know, our boats just keep getting older, but that means they’re better, too.” 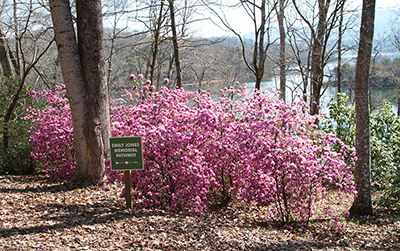 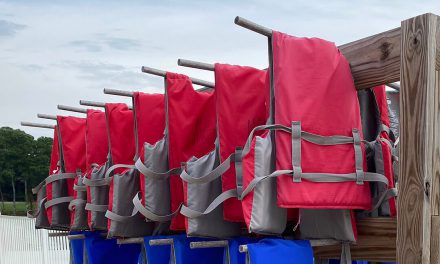 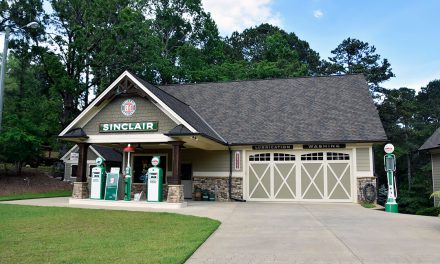