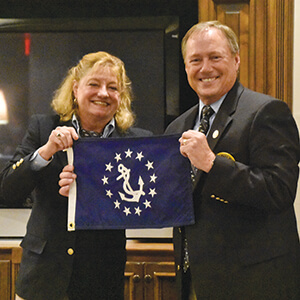 In a year when many things have been different, some things stay the same. Such is the case with the traditional University Yacht Club Change of Watch when new officers take over from the previous year’s command.

In a traditional, yet socially distanced, event, the 250-member club welcomed its new board and “bridge,” the five executive officers who will be in charge for the 2020-2021 year. New Commodore Tom Shirey took over the helm from now-past Commodore Lisa Herndon Wilson at an indoor buffet dinner that followed an awards ceremony on the club’s Great Lawn.

“We are looking forward to an activity-filled year ahead,” Shirey said. “As much as we can within the guidelines of the pandemic, we will be offering our members a full schedule of events on the water and at the club.”

Shirey has been a member of UYC since 2006. “I’ve been active in the organization since in the 1980s because my wife Susan’s family are long-time members,” he said. “Boating has always been part of my life and I especially appreciate all four seasons of boating on Lake Lanier.”

He and his wife Susan own a powerboat and have also been active in America’s Boating Club Atlanta. He’s a graduate of Georgia Institute of Technology and the University of New Haven and own CMIT Solutions, an IT firm.

McQuaid and his wife Danielle purchased their first boat in 2004, a 1989 Sumerset houseboat, spending their first five years at Holiday Marina. McQuaid, a native New Yorker, and Danielle from Indiana, have lived in Atlanta for more than 26 years and continue to houseboat, either docked at UYC or beaching up on an island around Lanier.

The couple has chartered power catamarans in the Caribbean and have also yachted in the Mediterranean and Adriatic. Additionally, they have also traveled Europe via river boat cruises. McQuaid graduated from the University of North Carolina at Wilmington.

“For us, UYC offers a home away from home for our members,” McQuaid said. “But it really goes beyond that. We have a sense of responsibility to protect not only the UYC facilities but to extend that sense of stewardship to the lake as a whole.”

He and his partner Gail Raper, an accomplished real estate broker, boat regularly on Lake Lanier. He has served in a number of committee and board positions at UYC. They have frequently cruised in the Caribbean and Mediterranean, but he said his two favorite trips were houseboating on the Sepik River in Papua, New Guinea and on the Nile River in Egypt.

“UYC is ideally situated on the lake at Big Creek and convenient to most everything,” Benninghoff said. “While we’re tucked away like a hidden secret, it’s a wonderful retreat and we’re all like family.”

As the son of a career Air Force Officer, Steve Simpson has lived in the Southeast with some time in London. A graduate of Georgia Tech he also attended the University of Southern California.

Simpson and his wife Diane now live in Suwanee. He owns Simpson Racing and Classic Restoration Services in Buford.

He and his wife Diane frequently cruise and anchor overnight on Lake Lanier. “UYC is a great social and boating environment where we have expanded our social network with more than 200 boating friends,” Simpson said. “The club and our members continue to serve as great stewards of our campus and the lake.”

Craig Wolf and his wife Betsy have been members of UYC since 2014 and are both very active in the organization. He’s a graduate of The Ohio State University and Western Kentucky University. The two came to the lake in the mid-1990s when they owned a ski boat. They live in Suwanee.

Their favorite Lake Lanier boating experiences include just being at UYC and on the docks with great friends, but also on the water, especially with events like the UYC Fall Leaf Cruise and the Fleet Review every year. “We really feel like UYC is one of the best-kept secrets on the lake,” Wolf said. “We have activities almost every weekend and are a very active club that welcomes new members.”

University Yacht Club was founded on Lake Lanier in 1951, several years before the lake was filled. It has active power and sail fleets, an on-campus dining room, and a full schedule of social events throughout the year. It is located in Flowery Branch. 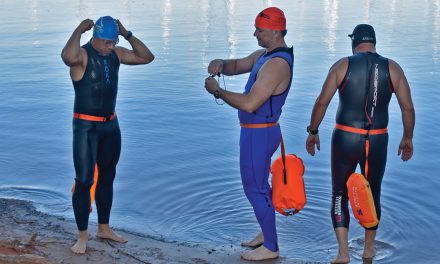 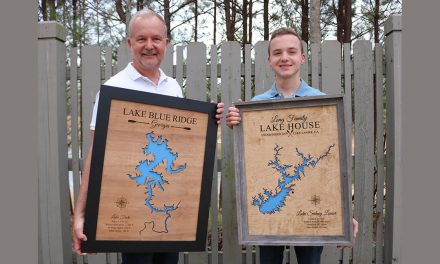 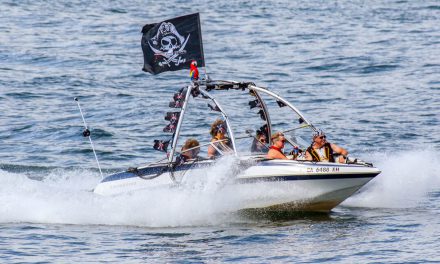