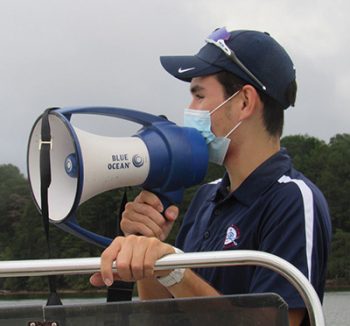 New Lake Lanier Rowing Club coach Howell Buot brings a rare combination of youth, experience, and versatility to the Olympic legacy rowing program that originated before he was born.

At a recent practice with new adult rowers many years his senior, the young coach led with authority, drilling them on posture, clapping out rhythm, and pointing out little flaws in form. He led the crew out of the boathouse workout onto the water, boarded the coach’s launch, and talked through a megaphone to amplify his instructions. Rowers complied eagerly, performing out-and-back repetitions on a rainy morning.

Noting a stop and chat moment in one four-boat, Buot reflected on rowers’ general aspect. “Rowers have an A-type personality, very strong and independent. But it is a true team sport, everyone has to be at the same level,” he said. “Compromise is necessary to fit in the context of a crew.” He waited while the four-boat figured it out.

Young rowers also must “learn to jibe,” he said. “They have to understand how to manage personality, to have empathy.” With all regattas canceled this season, he plans to stage ergattas (competitions on stationary rowing machines) and time trials to create a competitive spirit and test individual strengths.

Buot grew up in Atlanta, where he shunned sports and picked up a guitar instead. Upon entering Georgia State University to major in music, he checked an intramural sports and recreation website and saw “crew” listed first. He chose it by chance as his inaugural sport. Although his dad had rowed for the University of Virginia, Buot never felt an inclination to row until then.

“I was not in shape,” he said. At 215 pounds, he put extra weight on board. But a semester of getting up at 5 a.m. for weekday team practices on the Chattahoochee River helped make an athlete of him. Team workouts burning as much as 1,600 calories and smart nutrition melted off 60 pounds. “Gaining more knowledge, being surrounded by healthy people, and eating better” in college rowing changed his perspective.

Buot transferred to the University of Georgia his sophomore year, where he rowed in top 8 boats for the Bulldogs. While completing his music education degree and rowing for UGA, he drove back to Atlanta to coach high school rowers. Eventually, he would coach crew for the Westminister Schools, Peachtree City, and the Atlanta Rowing Club, helping with camps, learn-to-row, youth and masters programs.

He was finishing a teaching stint at Cambridge High School in Milton when he found out LLRC was looking for a youth coach. At Cambridge, he had cultivated the club crew from seven to 70 members. LLRC officials recognized his potential and invited him to help with summer camps. Buot went all in, assisting with learn-to-row, junior crew, and the fairly new program to take learn-to-row masters participants to the next level.

His off-the-water career also moved to Gainesville, where he now teaches in the English department at Riverside Military Academy. Typically, he rises early for his own rowing workouts at LLOP before heading to class. He leaves school around 4 p.m. to coach junior rowers on weekdays and heads back to the boathouse for masters’ training on Saturday mornings. Although the schedule hardly allows him time to breathe, he energetically shoulders the load. “It’s my responsibility,” he said.

He currently resides with long-time LLRC members, shortening the drive from his Dunwoody address. He relishes the Gainesville community’s support. “The city has been so nice,” he said of Gainesville tourism director and LLOP executive director Robyn Lynch, LLOP manager James Watson, and LLRC members. “They all say, ‘We’re so glad to have you.’ ”

“We are excited to welcome him to Gainesville and the Lake Lanier Rowing Club family,” said LLRC President Cliff Ward in a statement. “His past experience as a collegiate rower, previous coaching experience, along with his degree from the University of Georgia in the education field made him an ideal rowing coach for the club. He will focus on both Junior’s program (middle and high school) and coaching novice rowers of all ages. Howell was excited for the opportunity to coach rowing at Lake Lanier and we feel fortunate to have a young coach that connects with both Junior and Master level rowers.”

Buot said he wants to take the LLRC program to its potential. “There’s no reason why this isn’t the premiere club of the South,” he said. “It’s got the best facility, the best water, the best climate, and the best history.”

Senior LLRC member George Ordway, who accompanies Buot on the coach’s launch on Saturday morning practices, said long term members sometimes “lose sight of the fact that this is a legacy location,” the site of the 1996 Olympic rowing competition.

Buot added, “I wasn’t even alive during the (1996) Olympics.” Now he’s coaching for the club that helped bring the Games to Lake Lanier.

‘Sweep the Hooch’ lightens river by 35 tons of trash