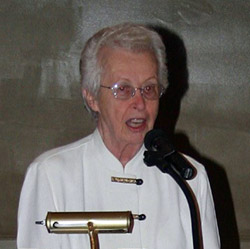 In mid-January, Jackie Joseph, an early official of Lake Lanier Association, passed away. She was instrumental in building the advocacy group from a collection of homeowners into a formidable organization that took on legal battles to protect the lake.

She and her late husband Bob moved to Buford in 1964 with their two children – Mark and Kathy – to purchase a local radio station. Soon she earned her First-class Engineering license, becoming the state’s first female radio engineer in 1965. In addition to engineering, she served as the station’s business manager.

Jackie, a graduate of the University of Miami with a degree in journalism, was a young mother with small children when she and Bob moved to Georgia in the 1960s. She spent her time between operations at the couple’s radio stations – WDYX-AM and WLKQ/Lake 102 FM – and raising Mark and Kathy. As the children grew up, she had more time to devote to community causes.

The couple built two additional radio stations and continued in the business for 40 years until 2003, when they retired after selling their remaining radio station, Oldies Lake 102 FM. In addition, Bob and she were founding members of Prince of Peace Catholic Church, which was then located in Buford. Jackie, along with Bob’s support, was extremely active in the Lake Lanier Association, becoming its president for over 30 years until her 2013 retirement. She was 89.