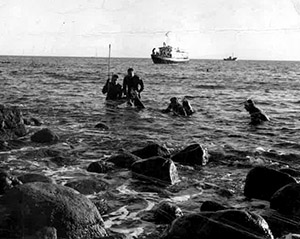 I joined the Navy a week after my graduation from high school. Looking back, this was the best possible thing I could have done. At age 17, I had a lot of growing up to do, and it was nice to do it in an environment where I didn’t have to worry about where I was going to sleep or eat or work. It also taught me how to get along with many different people with different backgrounds. When you’re sleeping in a room with 40 other guys, you must learn how to get along with each other quickly.

I got the opportunity to do things and see things that I never dreamed of. A great stroke of luck was my last duty station: two years shore duty in southern Spain! I was attached to the Explosive Ordinance Disposal/Underwater Demolition Team (EOD/UDT). In war time this included the “Frogmen” (later replaced by Navy SEALS). If a plane crashed or a ship sank, we were the ones who were first on the scene to defuse any explosives that were on board.

At that time, scuba diving was just becoming popular. TV shows like “Sea Hunt” and “The Undersea World of Jacques Cousteau” were viewed weekly by millions. There was also a famous swimmer named Fred Baldesare who had accomplished unprecedented feats such as swimming the English Channel and the Hellespont underwater! He had sponsors who financed these escapades to market their new sports products: swim fins, scuba tanks and regulators, wet suits, etc. 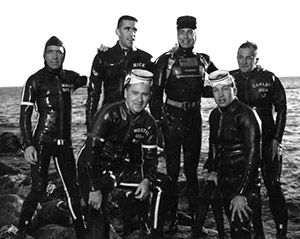 Our team on the beach in Ceuta, Spanish Morocco, North Africa after successfully traversing the Strait of Gibraltar. Baldesare is second from right in the back row.

Baldesare decided his next escapade would be to swim the Straits of Gibraltar entirely underwater! He had convinced the Commander of our Navy Base to loan him our dive team as support! He had also acquired the use of a private, 65-foot yacht and convinced the Spanish authorities to allow us to take off from the Spanish Naval base at Punta Europa, the southernmost point in the country. You must also note that Spain was a dictatorship, governed by Franco at the time, and this was only a few years after the Moroccans had thrown the French out of their country. Also, the import tariff was 100 percent, so smuggling was a lucrative business, (if you didn’t get caught), so border security was extremely tight.

The premise was that the yacht would tow a buoy at very slow speed. A safety diver with a spare full scuba tank would be secured about 20 feet below the buoy. Baldesare would swim submerged behind the buoy. Every half hour a second diver would go into the water and the two of them would exchange a new air tank for the one Baldesare had been using. The first diver would come back aboard, and the new diver would assume the duty as safety man for the next half hour until the process was repeated. Baldesare would remain underwater for the entire distance. If he broke the surface at any time, the dive was finished, and the challenge would be considered a failure.

Our support team consisted of about a dozen sailors, including a Navy photographer. We had all our dive gear plus a large air compressor and battery of air storage cylinders with a manifold to recharge our scuba tanks. We had scrounged all this equipment from the Naval Air Station and used a Navy truck to transport it the hundred or so miles to the take off point. None of us were in uniform because if there was a problem, the Navy would disavow any knowledge of our involvement.

When we arrived at the Spanish Naval base, we found that the admiral in charge did not speak English. I was the only one of our crew who was fluent in both Castilian as well as Andalusian Spanish. You can imagine how cool I felt as a lowly Third-Class Gunners Mate conversing with these commanders, captains, and admirals! 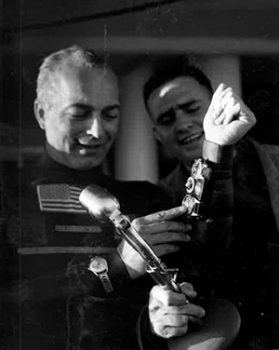 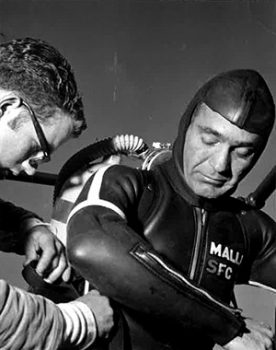 Mendes suiting up one of our divers. 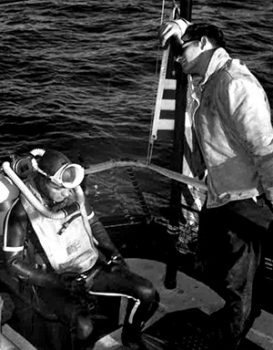 Mendes relaxing with one of the crew.

Once we had all the equipment aboard the yacht and were ready to go, Baldesare held a press conference. He was a consummate showman and obviously had done this before. He showed off all his ultra-modern dive gear (most of it was much better than ours, since we were still using stuff left over from the Korean War)! He also had a “bang stick” for repelling sharks! This consisted of a three-foot long pole with a 12-gauge shotgun shell mounted on the end. If a shark got within range of the stick, you just poked it at its side and goodbye shark! Now, there were no sharks within 300 miles of the strait, but nobody mentioned that! 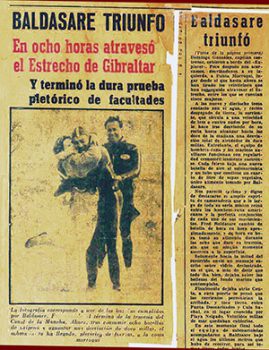 The dive went off without a hitch, and everything worked out exactly as planned. When you’re working with a bunch of guys who deal with explosives on a regular basis, you know attention to detail is impeccable. You don’t get a second chance if something goes wrong.

Although we started directly across from French Morocco, the current swept us through the strait to Spanish Morocco. The total distance was about 25 miles, although Baldesare only had to swim eight miles because of the current behind us. The entire swim lasted about eight hours.

The Spanish newspapers were delighted that he had swum from Spain to Spanish Morocco and had a field day!

From my viewpoint as a 20-year-old kid, this was the thrill of a lifetime! Little did I know that there would be many more thrills to come!

A man, a plan, and sour grapes

Be careful where you buy your fuel