I know we love springtime in Georgia. The flowers are blooming.  Dogwood blossoms are always amazing. Warming temperatures are feeling pretty good too, especially after such a cold winter.  However, March is my least favorite month. I think you know why. It’s severe storm and tornado season.

Damaging winds occur, on average, 19 days per year. These events have taken place in every month of the year but tend to be most frequent during the spring and summer months. The peak month is July, during which more than 500 events were reported over the past 40 years. During the favored months, the most likely time of day for wind damage is mid-afternoon through early evening.

Large hail pelts north Georgia on average seven days per year. April is the month of peak occurrence, but many episodes have also been reported in March and July. During this active period, the most likely time of occurrence is from mid-afternoon through early evening, during the maximum heating of the day.

The average number of tornado days is six per year. While tornadoes have been reported in all months of the year, most occur in March through April. During this “tornado season” the most likely time of occurrence is from mid-afternoon through early evening.

Tornado intensities of F2 or greater are involved in 37 percent of the events when data are broken down into a county-by-county basis. These strong tornadoes are more likely to occur during the months of March and April than in any other months of the year.

A significant and deadly tornado outbreak took place from March 24–28, 2021 in the Southeast, just one week after another outbreak hammered the area. There were 43 tornadoes confirmed across 11 states, with the bulk of activity on March 25, which resulted in the Storm Prediction Center issuing its second “High Risk Outlook” for the month of March, as well as the second high risk outlook for 2021. Several intense tornadoes touched down on that day, including ones that prompted the issuance of rare emergencies near the Alabama towns of Hoover, Brent and Centreville and in the Newnan, Ga., area. Scattered to widespread wind and hail damage occurred throughout the outbreak, and repeated rounds of heavy rain caused widespread severe flash and river flooding across much of Tennessee. Six people were killed near Ohatchee, Ala. by an EF3 tornado, while an EF4 tornado killed one person in Newnan. We saw the tornado on radar and how massive it was. We knew it was going to be bad. So, yes, March is a month I dread. 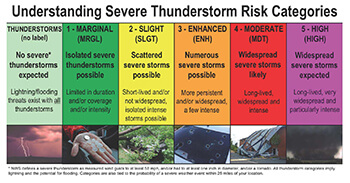 We do have some incredible technology available to us to track and forecast these tornado-producing storms. The Storm Prediction Center will let us know days in advance when our risk for severe storms is going up. You can learn the five threat levels and what they mean by checking out the accompanying graphic.

February is the month that can bring it all

June was topsy-turvy to say the least

Looking back on March 2021 tornado outbreak

Remembering the white Christmas of 2010