Life’s experiences lead to helping others 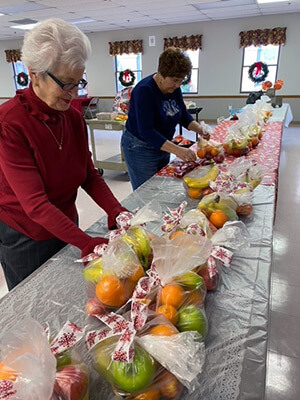 Kathy Prater and Nora Tiller, a volunteer at FBUMC, put together bags of fresh fruit for the Food Ministry.

Although it seemed unbelievable at the time, during a conversation more than two decades ago, neighbors Kathy Prater and Bea Simmonds discovered that right in their own neighborhood people were going hungry.

“Someone told us that this neighbor was subsisting on potato soup and another was only purchasing cat food so both she and her pet wouldn’t go hungry,” said Prater, founder of the Flowery Branch United Methodist Church Food. “Right then, Bea and I knew we had to do something about this.”

Little did Prater know then that her neighbors’ plights were more pervasive in Gwinnett and Hall counties than she and Simmonds ever imagined. She couldn’t sit by and let that happen.

German-born Prater had known hunger herself as a youngster growing up in Germany following World War II, being smuggled onto a train to move from East Germany to West Germany in 1946 to live with her grandmother. Along the way to the West, her family spent time in a refugee camp, eventually walking 100 miles to finally reach her grandmother’s home in Kassel.

“I still recall how it felt being hungry and cold and how helpless we felt,” she said. “And I remember the kindness of the American veterans who helped us move to the West,” she said. “As I grew older I worked as a maid for American families, and that’s where I met my future husband Bill Prater, who was a veteran.”

Moving to the States

One of her employers introduced her to Prater; they married and moved to the United States in 1960. She became a citizen three years after they arrived. Together they raised three children, eventually moving to Toledo, Ohio.

“Knowing what it was like, Bill and I always took care of refugees no matter where we lived,” she said. “I knew the life of a refugee from my own experiences as a child and God led me to always love and take care of others.”

Bill died of a heart attack in 1991, and her oldest daughter passed away in 1993. By 1999, she said she’d had enough of cold weather. Her son encouraged her to move to Georgia and that’s where she met Simmonds.

Around that time, she began to seek a home church, one that fit with her commitment to God and her love and caring for others.

“I really needed to get busy once I moved here and I soon found Flowery Branch United Methodist Church,” she said. “The people there continue to be giving and loving, and one of the best things is that we share a like mind for caring for people. God said, ‘Feed my people,’ and that’s just what we set out to do.”

She soon started the Flowery Branch United Methodist Food Ministry with the support of the church and others.

“This is not a food bank; it’s so much more than that,” Prater said. “We help people in need all year long. We get to know the families very well.”

“Kathy has known what hunger is like and everything she does comes straight from her heart,” said Betty Terrell, lay leader and finance chair for Flowery Branch United Methodist Church. “She works tirelessly, making sure all these area families are connected with food resources, but it’s so much more than that.

“The Bible says that there will always be people in need and we as Christians have to search for the best ways to accommodate those needs through our churches, community organizations and the government,” Terrell said. “Our food ministry is doing that.”

Over the years, Prater has connected people and families in need with resources at organizations like the South Hall Food Bank, Prince of Peace Catholic Church and Good News at Noon. She also works closely with area grocery stores and other organizations, including Aldi’s, Publix, Kroger and area produce stands, most of the time purchasing food by the case using monies donated to the Food Ministry and sometimes receiving donations of breads, non-perishables and others. Chick-fil-A and Longhorn Steaks provide food as well.

Community organizations, such as University Yacht Club, conduct food drives and fund-raising campaigns periodically to contribute. And the Flowery Branch UMC Food Ministry is always open to accepting donations to help with funding.

The food ministry provides sandwich lunches for area children when they’re not in school. With the help of Prince of Peace Church, they often prepare more than 200 sandwiches.

Recently, Prater and Simmonds picked up several cases of hams from Aldi’s. They’d gone on sale that morning.

So where does all this food go before it reaches its beneficiaries?

Prater has converted most of her home into food storage areas, from building shelves for organized canned goods and non-perishables to large refrigerators and freezers for storing meats, cheeses and other perishables.

The church also uses its resources, from its refrigerators and freezers to its fellowship hall where volunteers come together to create food baskets, a holiday dinner with all the trimmings,  or gifts for families during the holidays. Angie McIntyre at the church also provides support.

Prater spends many days in her van, picking up food from donors or delivering food to families in the community. However, her day-to-day involvement will draw to an end soon.

In early 2022, Prater will be retiring from managing the Food Ministry, but she has laid extensive groundwork to ensure that people will find the food and support resources they need.

“At 80, my arthritis is beginning to get the best of me, particularly in my hands. It just hurts too much,” she said. “This mission requires a great deal of hands-on time.”

For the past six months, she has reached out to the Food Ministry’s partner organizations to pave the way for families to continue to receive the help they need. The church will continue to be a focal point for donations as well as a central contact for families. many of the organizations are stepping up to help even more, including the South Hall Food Pantry, Prince of Peace, Good News at Noon and Covenant Church.

“I will still be around to provide support, but I have to stop doing as much as I have been because of my health,” she said. “I just won’t be as involved as I have been, but I know it will continue.”

Her network of volunteers and other organizations won’t let the Food Ministry end, because of committed church and community members who will carry on.

People like Betty Terrell and others will make it so.

Perhaps Terrell said it best: “If you see a need, do something,” Terrell said. “That’s the way so many of us feel, and Kathy has been a shining example of that.”

Prater is candid about the purpose of the Food Pantry. “It’s not a way to try to bring people into the church,” she said. “For us, it’s about getting them fed and taken care of first, then praying.”

The Flowery Branch United Methodist Church is located at 5212 Spring Street downtown. To connect with the Food Ministry, to make donations, volunteer or help someone in need, call 770 967-3441.