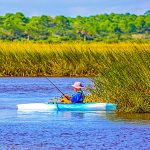 Tourists stood mesmerized as they watched a young bald eagle in an apparent dog fight with an osprey over the inland waterway just south of St. Augustine, Fla! The smaller osprey clutched a fish in his sharp talons and the hungry eagle was determined to take it away! To the people below, the aerial battle was akin to fighter planes from a bygone era tangled in a deadly combat that took them from inches above the water to a thousand feet in the air. After a more than 10 minute exhibition of phenomenal flying skills, the osprey finally gave in to the larger eagle and dropped his meal into the bay to be swiftly scooped up by the relentless eagle.

America began around 400 years ago when the Spaniards built the Castillo de San Marcos fort as a monumental reminder of their claim to the New World. This action led to the formation of St. Augustine, which is the oldest city in America, and though many national flags have blown in her sea breezes she is still a uniquely American place to visit.

Most tours of this ancient city on Florida’s East Coast begin with a walk through and around the old fort that was made from a mixture of shells, sand and clay, known as coquina. This concoction could be easily molded into impregnable walls and then covered with white plaster for a better look. An hour spent on these grounds gives one a feel of the historical magnitude of St. Augustine and the opportunity for some unforgettable photos.

Every morning, the first streaking light beams of sunrise illuminate the beautiful panorama of the city. It has always been and still is one of the favorite places for many Georgians to visit, but changes have made it even better! One of the most notable is the complete, modern restoration of the old Bridge of Lions going to the lighthouse and beach. In the past, it would have taken nearly a half hour to let a boat through the harbor area, but the state-of-the-art drawbridge now opens and closes in less than 10 minutes.

During any day on the water near St. Augustine, many encounters with nature are the norm in this pristine Florida estuary. Numerous species of birds always accompany any foray into these picturesque but intricate tidal waterways. Also, the fishing is usually fantastic for redfish, sea trout, flounder, jack crevalle, ladyfish, mangrove snapper, black sea bass and many other species. For the really serious anglers, huge tarpon, snook and cobia are the main choices, depending on the time of year.

So much spectacular beauty that is unique to this part of Florida is always experienced including dolphins, bald eagles, ospreys, white and brown pelicans, several variations of egrets, herons and too many marsh and waterbirds to mention.

While visiting St. Augustine, visitors must cross the Bridge of Lions to the beach side to see and climb the St. Augustine Lighthouse where a breathtaking view of the city and beach can be enjoyed. Though the original structure crashed into the sea during a storm in 1876, the current lighthouse was already in operation by 1874. It is one of only 30 lighthouses in the USA and one of six that are open to the public. It also has a beautifully restored lighthouse keeper’s quarters containing many historic objects.

For those who plan to visit this area for fishing, birding, history or simply family fun, few places in the Americas command the historical respect and significance of St. Augustine. Its narrow, brick streets, ancient buildings and Mediterranean atmosphere appear much as they did during the 17th century. Most of the building boom in Florida bypassed St. Augustine and allowed a thoughtful restoration program to proceed. The result is a historical showcase of old and new that draws vacationers from all over the globe. For Americans, St. Augustine is one of those special places that must be seen and experienced at least once in a lifetime!

A visit to Mobile and historic Battle House

Springtime beauty and celebrities return each year to Helen