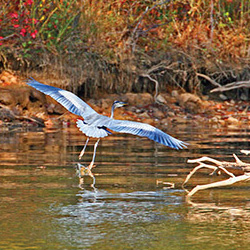 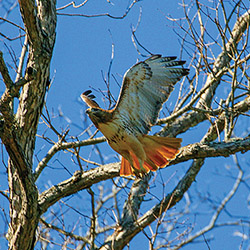 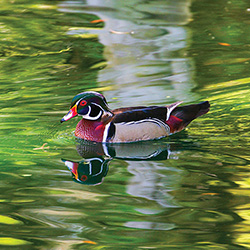 Even a deadly virus can’t stop the beauty of the spring season and rebirth in the natural paradise here at Lake Lanier. Though most everything is closed, partially closed, or suspended, the majority of boat ramps are still open for those who possess or have access to any kind of watercraft! Also, for the first time in several years, the lake is completely full and we are experiencing a “normal” spring. Everything on Lanier is in bloom and the fishing for most species is better than I’ve seen it in years.

The warmth of the sun has been felt lately and we have experienced some delightful days, so despite this period of “doom and gloom,” Mother Nature has begun to wave her magic wand, and the Earth and waters are coming alive. From having fished this lake for more than 40 years as a fishing guide, my experience tells me that this could be one of the best fishing and wildlife springs we’ve seen in many years. 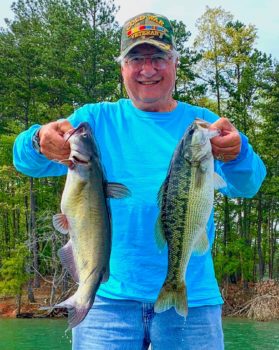 Things have changed this spring at Lanier as to the way we are catching bass during the spawning period. In fact, as the surface temperature of the water crept up, I discovered a new twist on an old method to catch plenty of spotted bass with a lure that was modified for better action. We have been accomplishing this by utilizing Swirleybirds in 1/8th ounce sizes that have been updated by Veterans Fishing Lures  These lures have enough weight to take the lure to the desired depth with enough flash to attract bass and other species.

The lake has become alive with the sounds and sightings of birds and wildlife that magically appear in every direction. This spring is becoming a special time to enjoy the abundant bird populations and diverse flora and fauna!

We first saw the tiny buds appear on the very tips of tree limbs, then bird songs became more prevalent and now animals are being seen during their mating rituals along the forested red clay banks of the lake. The shorelines have exploded with colors from the dogwoods, mountain laurel, rhododendron, and wild azaleas.

The return of bald eagles to Lanier has been exciting, and now they seem to be showing up more frequently on the main parts of the lake. Ospreys are also relative 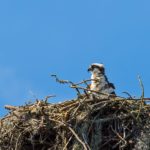 newcomers to the area around the lake, but these birds of prey have become more prevalent in this part of Georgia since the stocking rates of striped bass were increased. Because ospreys are normally larger than hawks or falcons and have a white head, they are often mistaken for the bald eagle. Upon closer inspection, one can easily see that the osprey has a dark band across its face and a smaller, less colorful beak than his more well-known relative, and even more obvious is the osprey’s white breast feathers. Bald eagles are quite dark underneath. 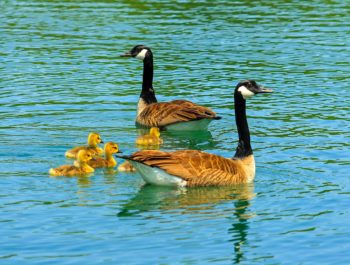 Throughout the spring one can see and hear the most unique bird that has ever graced the waters of Lake Lanier … the common loon. Loons are divers that are 24 to 40 inches in length and have an elongated body and sharp, pointed bill. They are strong swimmers that propel themselves when diving by using their radically webbed feet. Their legs are attached far back on their bodies, a characteristic that permits ease of movement when swimming but causes great difficulty when attempting to walk on land. Loons are unique among living birds because their legs are encased within the body all the way to the ankle. They can easily swim faster than most fish. Loons are also good fliers, often reaching speeds of 60 miles per hour in the air but requiring an extensive run along the top of the water to become airborne. As always, it will be a sad morning when I go out on Lake Lanier and don’t hear that high-pitched, lonely song of the loon that has warmed my heart throughout this past winter and spring.

Despite the terrible virus of this spring, the always spectacular scenery at Lanier, the surprising wildlife encounters, and the great fishing, offers nature’s classroom as a “staycation” to all of us. An abundance of picturesque flora and active fauna are a major part of a continuously changing kaleidoscope of natural splendor at Lake Lanier!

Pinckney Island is a special place for nature lovers